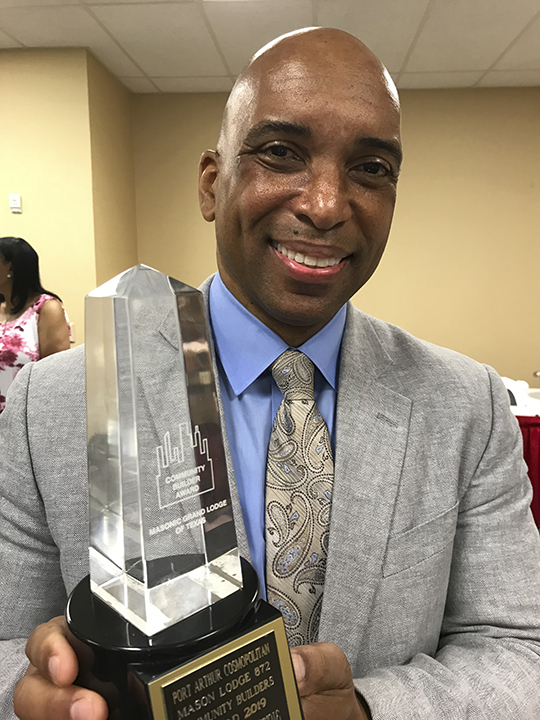 Once the credits for Mark Porterie started rolling Thursday, they just didn’t stop.

The popular Port Arthur Independent School District superintendent was awarded the 2019 Community Builder award by the Port Arthur Cosmopolitan Masonic Lodge 872, with lots of mention about his stalwart efforts to keep his school system afloat and functioning after Hurricane and Tropical Storm Harvey.

But credits in nomination letters and from the Masons on Porterie’s behalf included his steady climb up the ladder to lead the school system he once attended. It included his work in leading community bond issues to improve facilities, in effecting better student test scores, in working cooperatively and effectively with the school board, in raising teacher morale.

Mayor Derrick Freeman proclaimed Thursday as Mark Porterie Day in Port Arthur, and thanked him for “raising the level of excellence” in Port Arthur. County Judge Jeff Branick sent recognition from the County Commissioners. Pat Avery, president and CEO of the chamber, detailed Porterie’s work with the chamber on behalf of public schools. And so on.

“I really am a shy person,” Porterie told the packed room, and thanked his wife, Caffrie “Penny” Porterie for her constant support.

“The Lord sent her to me and the Lord put her in my life,” he said.

Holding the award, he said, “It’s not about me. It’s about us.

“We must talk. We must come together. We must love one another.”

The Masons have given the award since 1991.

Former recipients Jeff Hayes and Aletha Kirkwood were on hand.