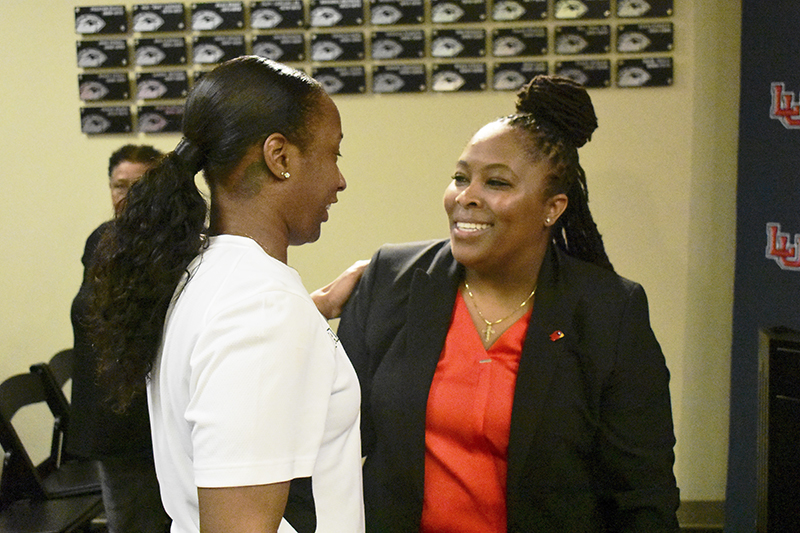 Franklin, who was hired May 1, noted all three coaches, like her, are Texas natives.

“Their energy and work ethic is second to none,” Franklin said in a news release. “They all bring something different to the table and will be great assets to the program not only in recruiting and teaching on the court, but also investing in our young ladies and being great mentors for them.”

Davenport, a four-year standout at the University of Texas, was hired onto the LU staff last year. She played one season in Sweden and was an assistant coach with Nike ProSkills EYBL and trainer for Full Throttle Basketball before coming to Beaumont.

“I was very impressed with Empress once I accepted the job and learned she didn’t allow the players to miss a beat during the transition,” Franklin said. “That was a huge for me knowing that our players finished the spring semester strong academically. … I am fired up to keep Coach Davenport on board to complete our staff.”

Hill, a 2014 Texas A&M graduate, was an assistant coach at Urbana (Ohio) University, where he landed two recruits in the top 64 in the Ohio Girls Basketball Reports and helped the team attain a 3.3 grade-point average in the fall of 2014. He was a video coordinator at TCU, worked with the Dallas Wings during the 2016 preseason camp as an assistant and practice player and then served on Texas State’s staff.

Mitchell went 34-29 in two seasons at Garden City. Six of her players earned All-Jayhawk honors, and 24 of 27 players graduated. Sixteen of her players moved on to four-year programs. The former Paris Junior College and Southeastern Louisiana (2007-09) player previously coached at Cisco College and Odessa College.

Harmony left Lamar for the College of Charleston in South Carolina in April. Two of her assistants, Randy Schneider and Cameron Miles, went with her, as well as former Lamar graduate assistant Carlie Heineman, now the Cougars’ director of basketball operations.