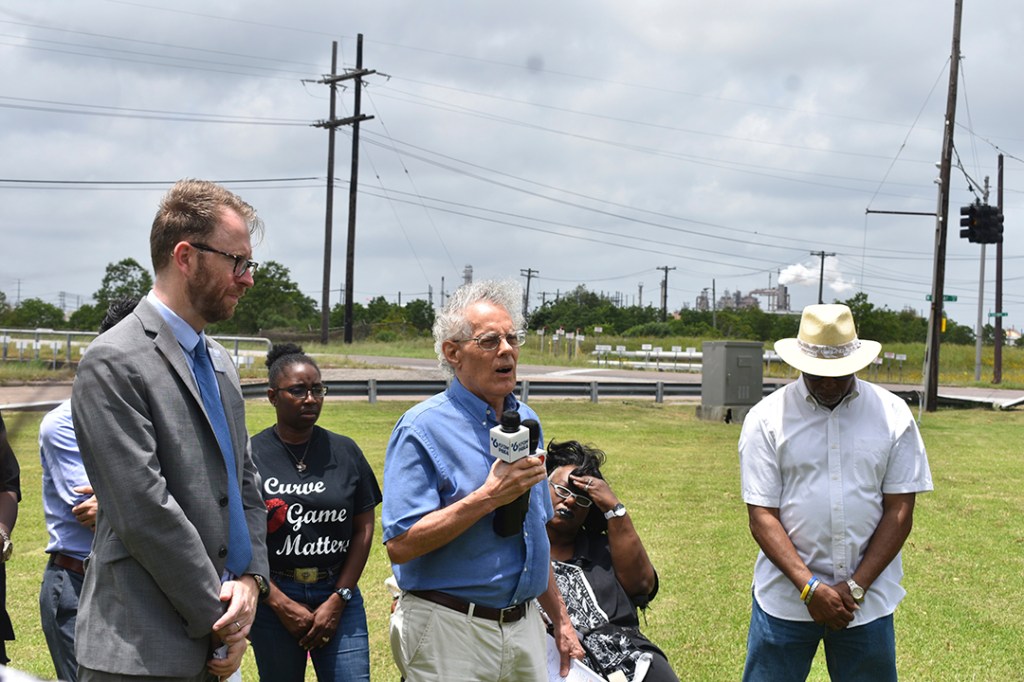 Representatives from all three organizations discussed the possible federal action at a park on Terminal Road near the facility.

“According to the records the company has filed with the state of Texas — their own records — they have admitted to releasing more than 1.8 million pounds of pollution without authorization,” Environment Texas Executive Director Luke Metzger said. “That is pollution above and beyond what their permits allow.

“That includes chemicals like hydrogen sulfide, sulfur dioxide, particulate matter and others that are harmful to human health, particularly the thousands of people living in the shadow of the refinery here in Port Arthur.”

Metzger said Environment Texas released a report in January looking at facilities across the state for violations and the Valero Port Arthur refinery stood out as “one of the worst polluters in the entire state.”

“In 2017, they released more unauthorized particulate matter than any other facility in the entire state of Texas,” he said. “Particulate matter can be particularly harmful. It is linked to heart attacks and even premature death.”

Sierra Club and Texas Environment have successfully sued companies over the past decade for violating the Clear Air Act, he said.

Sierra Club Clean Air Program Director Neil Carman said he has been involved in environmental enforcement for 40 years as a former Texas Commission on Environmental Quality investigator and enforcement official.

“This case is a shocking example of why we need the Clean Air Act,” Carman said. “Valero has been breaking the law for five years. This pollution doesn’t stop at the fence line. It’s outrageous because it drips all over the community.”

Carman said the TCEQ’s system of regulation is broken.

“This is an outrageous example of how TCEQ doesn’t protect public health and the right to clean air,” he said. “If the TCEQ were to prosecute this case, they would divide into very small numbers of violations. They would piecemeal the corrective actions, which would not really stop a lot of the pollution and the penalties would be more like traffic tickets rather than a serious effort to get Valero’s attention.”

John Beard of PA-CAN said the company should take responsibility for its actions and look to correct their mistakes.

Beard said there is technology Valero can put in place to regulate the emissions.

“They can implement better practices,” he said. “They can better train their operators so that the operators don’t have as many human errors. There are ways to mitigate these things. Some things they can’t prevent, but they can minimize them by being proactive.”

“Valero wants to be a good neighbor,” Beard said. “Now, they have to step up to the plate.”

By law, the groups are required to give Valero 60 days notice before they file the lawsuit. Metzger said they asked to meet with the company within the next 45 days to discuss negotiations.

Carman said the case is not a personal injury case and any potential money won could go back into the community as it has in past settlements.

Metzger said they would file the suit July 23, at the earliest, in federal court in Beaumont.