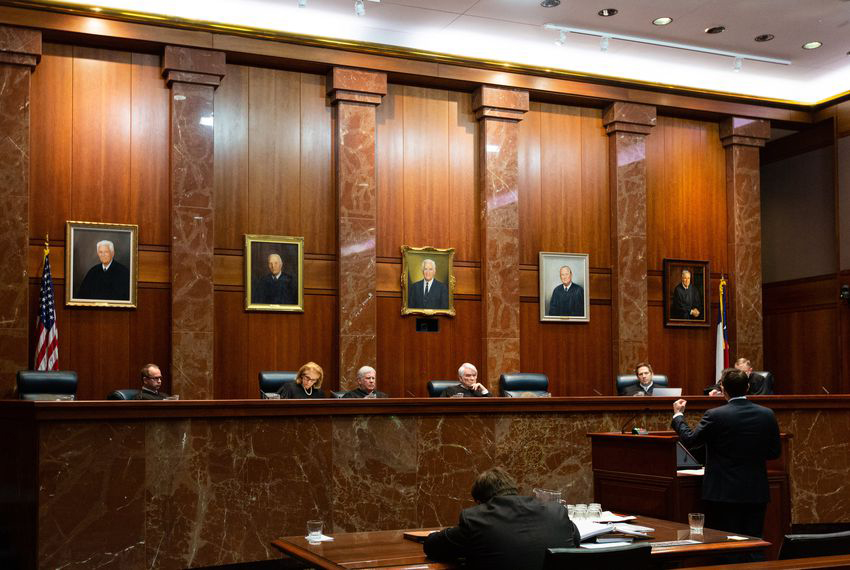 Battling sick-leave ordinances via the legal system comes with its own set of pitfalls: It’s expensive and can be slow. (Emree Weaver for The Texas Tribune)

For conservative Texas lawmakers and their allies in the business community, the fight over paid sick leave seemed like a slam dunk at the start of this year.

Left-leaning cities Austin and San Antonio were in Republicans’ crosshairs after adopting ordinances that required private businesses to offer their employees a certain number of paid sick days. While the city council members spearheading those proposals touted them as beneficial to workers, lawmakers on the other side of the ideological spectrum took issue with cities taking a new role in private companies’ employment policies — and creating patchwork regulations that only applied in certain parts of the state and might differ within a matter of miles.

Legislation blocking those ordinances was hailed as a priority in the Texas Senate, blessed by Republican Gov. Greg Abbott and lobbied for by wealthy business groups.

But as the session winds down, the bills that would achieve those goals missed the deadline to be considered on the House floor — meaning they’re effectively dead.

There are a few procedural ploys lawmakers could utilize to revive the bills at the last minute — like attempting to tack on the bill’s language to other pieces of legislation still in play. But many business groups, fed up with what some called petty politics and the monthslong staring contest between the House and Senate over whether language explicitly protecting nondiscrimination ordinances should be included in the bills, have largely given up on lawmakers’ ability to resuscitate the legislation.

And with little faith in the ability of House and Senate leaders to reconcile their differences regarding that language, business advocates have set their sights elsewhere to kill the ordinances: the courts.

“That’s our only alternative since the Legislature failed to act,” said Annie Spilman, the state director for the National Federation of Independent Business. “This really was not a good session for the business community.

“The legislation is dead, and we have no hope that anybody has any sort of concern for the business community.”

Meanwhile, supporters of the sick-leave policies say they’re glad that the Legislature seems to have moved on to other issues.

“I’ve heard that the Legislature is trying to wrap up its big important business, like school finance and the budget, and I think that’s where the focus should be,” said Austin City Council member Greg Casar, who authored Austin’s sick-leave ordinance.

But Creighton overhauled the measure in an upper chamber committee and stripped out a provision in the bill agreed upon by business groups and other stakeholders that explicitly protected city ordinances that ban workforce discrimination.

The bill then became ensnared in a fight over protections for LGBTQ workers and stalled in the Texas House. Creighton later filed four narrower bills, each aimed at accomplishing a slice of the original measure’s goals. But after those bills passed the Senate, a House committee reinserted the language explicitly protecting the nondiscrimination ordinances, and none of the four bills made it onto the House calendar in time for a debate by the full body.

“We sat there in [the] State Affairs [Committee] and said that’s not the fight we’re having this session,” said state Rep. Drew Springer, R-Muenster, during an onstage conversation Wednesday with Texas Tribune CEO Evan Smith.

To be clear, members of the business community say they harbor no animosity toward Creighton or Texas House members. But frustration persists, especially with leaders who vocalized support for the issue.

“They had all session to get this done,” said Pamela Bratton, the vice president of contract administration and compliance with Meador Staffing Services. “People taking a stand on their high ground isn’t what we hire and elect politicians to do.”

Now, all eyes are on the courts.

Last year, the state joined a number of business-aligned groups and small businesses in obtaining a temporary injunction against Austin’s sick-leave ordinance — which was put on hold after an appeals court said it was unconstitutional.

But duking it out through the legal system comes with its own set of pitfalls: It’s expensive and can be slow.

Austin, for example, is appealing the lower court’s ruling and asked the Texas Supreme Court for a second opinion. Rob Henneke, general counsel for the Texas Public Policy Foundation, said the court likely won’t decide until this summer, at the earliest, whether it wants to take the case. If it does, a ruling might not come down until the end of this year. And since the capital city’s ordinance was put in place, San Antonio and Dallas have adopted similar sick leave policies that the business community is also hoping to overturn. No lawsuits have been filed yet to upend these ordinances.

“If the Legislature came in with a broader preemption … then that could make the need for further litigation less important,” Henneke said. “But that’s all hypothetical at this point.”

Still, he said he’s confident that the opponents of the ordinances will ultimately prevail in court.

“Our case has been successful,” Henneke said of the Austin ordinance, “and we would expect the same for the other jurisdictions if that’s the direction the business community chooses to take.”

Creighton, for his part, said he’s also pinning his hopes on the legal system.

“The failure to act on a package of the most pro-business bills this session will undoubtedly hurt Texas small businesses,” he said in a statement to The Texas Tribune. “The only hope now is that the courts reverse these costly and burdensome regulations, and restore the predictability and common-sense policies Texas business needs to thrive.”

But while she’s confident the courts will land on her side, Spilman said the National Federation of Independent Business is also considering asking the governor to call a special session to take up the preemption bills if they don’t make it across the finish line. A spokesman for Abbott didn’t respond to a request for comment on whether he’d consider calling a special session for such purposes.

“Hopefully its important enough that we can potentially come back and address this sort of local overreach,” Spilman said. “I feel like it’s that much of a state emergency.”

Some, like Bratton, are hoping for a last minute Hail Mary — “I still believe in Santa Claus. Miracles could happen,” she joked — but most agree that they now have to take matters into their own hands.

“This legislation should’ve been an easy pass for the business community, but unfortunately it was hijacked and we had no say in the game,” Spilman said.

Disclosure: The Texas Public Policy Foundation has been a financial supporter of The Texas Tribune, a nonprofit, nonpartisan news organization that is funded in part by donations from members, foundations and corporate sponsors. Financial supporters play no role in the Tribune’s journalism.