Ceremony at the Seawall: Seafarers remembered on National Maritime Day 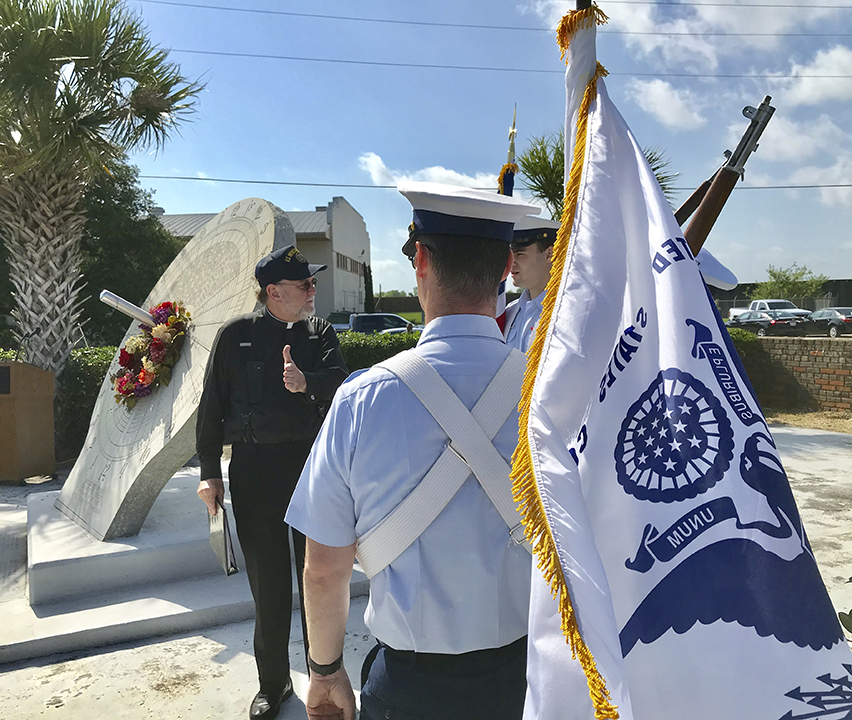 The Rev. Sinclair Oubre talks with members of a Coast Guard color guard on May 22, 2019, at the Seaman’s Memorial Equatorial Sundial in Port Arthur. (The News file photo)

Port Arthur seafarers and those who support them along the shore observed National Maritime Day on Wednesday with a brief ceremony at the Seaman’s Memorial Sundial downtown.

Some 40 participants honored the nation’s colors, shared scripture and made a procession to the Seawall, along the ship channel. A wreath was placed in the waterway by the Sabine Pilots.

This year’s national maritime observance was themed “Empowering Women in the Maritime Community.”

“On this day, we recognize mariners of our nation and our community,” said Larry Kelley, director of the Port of Port Arthur, awaiting the start of the ceremony. “Some gave the ultimate sacrifice, protecting our coast and in times of national emergency.”

The sundial was erected in 1973 in honor of the crew of the SS Texaco-Oklahoma, which sank March 27, 1971 on a voyage from Port Arthur to Boston. The cause was structural failure. Thirty-one lives were lost.

In his Maritime Day proclamation, President Trump said, “We recognize these seafaring merchant mariners for helping to fuel our economy, maintain our sea power and support our national security.”

Deputy Maritime Administrator Richard Balzano will be the keynote speaker at the Texas National Maritime Celebration which will be observed Thursday night at the Carl A. Parker Multipurpose Center, 1800 Lakeshore Drive.

The State of the Waterways speaker will be Jefferson County Judge Jeff Branick.

See also: ‘Maritime Day’: This city should embrace it