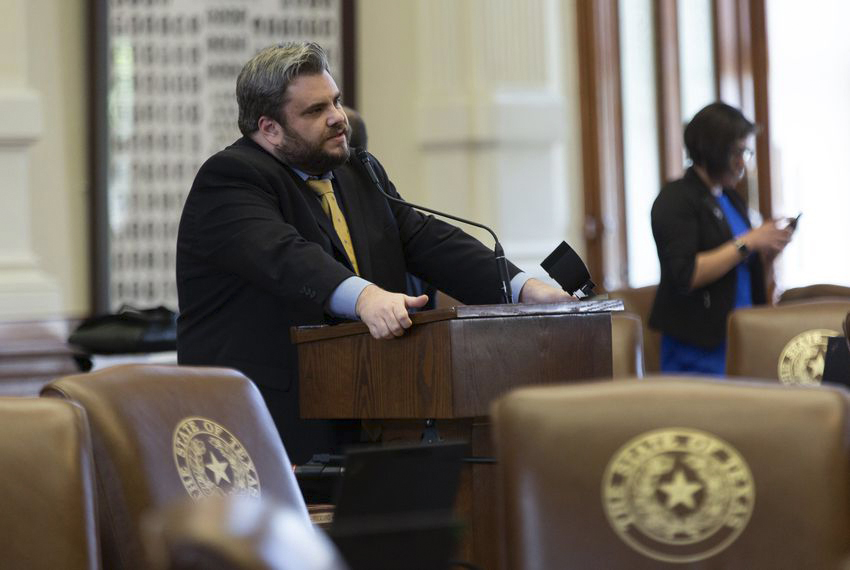 A major mental health bill prioritized by the state’s top leaders as a way to help prevent school shootings was partially revived late Tuesday night hours after it appeared to have been abruptly killed on a technicality during a dramatic night in the Texas House.

State Rep. Jonathan Stickland, R-Bedford, raised a “point of order” on Senate Bill 10, which created a Texas Mental Health Consortium aimed at bringing together psychiatric professionals from Texas medical schools and other health care providers to connect children to mental health services. Stickland’s point of order contended that an analysis of the bill provided to lawmakers was inaccurate. After the House recessed for nearly an hour and a half so parliamentarians could analyze the technicality, House Speaker Dennis Bonnen, R-Angleton, somberly announced a ruling in Stickland’s favor.

But hours later, provisions from SB 10 were added to Senate Bill 11, a school safety bill that the lower chamber passed earlier in the evening. State Rep. John Zerwas, R-Richmond, sponsored SB 10 in the House and successfully amended it to SB 11 over Stickland’s objections shortly before a midnight House deadline to advance bills from the upper chamber.

SB 10 is one of several proposals that the state’s GOP leaders championed in the wake of the deadly shooting last year at Santa Fe High School. Gov. Greg Abbottnamed it an emergency item in his State of the State address earlier this year, and Lt. Gov. Dan Patrick designated it one of his 30 legislative priorities.

Sen. Jane Nelson, R-Flower Mound, the bill’s author, told senators earlier this year that it was her “best shot” at helping students in the aftermath of school shootings. It had bipartisan backing and cleared the upper chamber unanimously more than two months ago.

“I think it was a well-intentioned bill that had some very bad unintended consequences,” Stickland told the Tribune by phone Tuesday night, an hour after his point of order initially knocked the bill out of contention. “I think it could have been stronger on parental rights to make sure our constitutional rights are protected in the bill.”

Asked if he was bracing for backlash from leadership over killing such a high-profile bill, Stickland said, “I expect it.”

Within a couple of hours, Stickland got it.

As it became clear Tuesday that Stickland’s point of order would torpedo the legislation, key players who worked on SB 10 moved quickly to figure out next steps. Zerwas, a Richmond Republican, walked across the Capitol rotunda into the Senate, where he spoke with Nelson, presumably about news of the bill’s fate.

“It’s unfortunate that there were some people who were getting some negative comments from their constituencies that felt the need to vote against this bill or somehow kill this bill,” Zerwas told the Tribune. “And one of those happened to be Jonathan Stickland, who’s pretty adept in finding points of order and calling them, and he wins some, he loses some, and unfortunately, he happened to win one with Sen. Nelson’s bill.”

Just before 11 p.m., state Rep. Greg Bonnen, a Friendswood Republican and brother of the House speaker, made a motion to revive the mental health bill by amending a sweeping school safety bill passed earlier Tuesday. He offered a cryptic message that there was “an opportunity to do some additional work” in order to “further make safe our schools in the state of Texas.”

Stickland approached the chamber’s back microphone with questions.

“Is this something we’ve seen before?” he asked.

Stickland attempted to delay the motion, asking procedural questions about how the chamber was going to reconsider a portion of a bill that had already passed. He then gave a speech imploring colleagues not to reconsider SB 11, the school safety bill.

“Maybe you plan on voting for it, and that’s fine,” Stickland said. “But here’s what I can promise you: One day, there’s gonna be something that you care about where you might be in the minority. … You’re going to hope that these rules and our traditions and the way that this House operates protects you and your ability to stand up for your constituents.”

At one point, Stickland and a group of lawmakers huddled at the front dais to discuss his attempts to prevent adding the mental health provisions to the school safety bill.

“I’m sick of this shit,” Stickland could be heard telling Dennis Bonnen.

Zerwas eventually succeeded in reviving major elements of the mental health bill, despite two further attempts from Stickland to prohibit the amendment on technicalities.

Stickland has built a reputation for being a thorn in the side of House leadership, under both Bonnen and former House Speaker Joe Straus, R-San Antonio. A former member of the hardline conservative Freedom Caucus, which he resigned from earlier this session, Stickland cast the lone “no” votes on several high-priority bills this year, including the House’s school finance reform proposal.

On a number of occasions this session, Stickland has tried to kill legislation ranging from the controversial to the uncontested. In April, for example, he successfully knocked several measures off of that day’s local and consent calendar, which is typically reserved for uncontroversial legislation. Stickland’s reasoning? Liberties were under attack.

It was one of two school safety bills that advanced in the Legislature within hours of each other. The Senate also approved a House bill that would abolish the cap on how many trained school teachers and support staff — known as school marshals — can carry guns on public school campuses.

The nonprofit Mental Health America ranks Texas last among the 50 states and Washington, D.C., for youth access to mental health care. According to its 2019 report, The State of Mental Health in America, 71.3% of youth in Texas with major depression go untreated, compared with the national average of 61.5%.