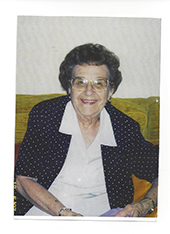 Marjorie “Patsy” Gardner Boudreaux, 97, of New Braunfels and formerly of Port Arthur passed away on Sunday, May 19, 2019 at her daughter’s residence in New Braunfels.

Patsy was born on February 19, 1922, in Port Arthur, Texas to Ursula Peltier Meeks and David Samuel Meeks.  She graduated from Jefferson High School and received a Bachelor of Arts degree from Southwest Texas State University. Patsy taught Elementary School in Kenedy, Texas with her favorite assignment being First Grade.  She truly loved her students and kept up with many of them through the years. She was also known for her talent and love of playing the piano.  She performed on a radio program when she was attending Jefferson High School in Port Arthur, and played many different venues in the Karnes County area. Patsy enjoyed gardening and was an avid sports fan with her favorite teams being the Dallas Cowboys and San Antonio Spurs.

She married Henry Linn Gardner on September 14, 1941 and they had four children; Dianna Leah, Thomas Henry, Mary Susan and David Michael.  She later married Leo “Bob” Boudreaux on May 5, 1981.  They made their home in Nederland, Texas, and then later moved to Port Arthur, Texas.

Survivors include three of her children; Thomas Gardner and wife Michele of New Braunfels, Texas; Susan Adams of New Braunfels, Texas; David Gardner and wife Jodie of Springtown, Texas; nine grandchildren, seven great-grandchildren and many friends who loved her dearly.  She was preceded in death by her husband, Leo “Bob” Boudreaux, parents D.S. and Ursula Meeks, a brother David H. Meeks, and her daughter Dianna Shaw.

The family will receive friends Friday May 24, 2019 from 6:00 – 8:00 PM at Grammier – Oberle Funeral Home. A Mass of Resurrection will be 11:00AM Saturday May 25, 2019 at St. Catherine of Sienna Catholic Church. The interment will follow in Greenlawn Memorial Park.

In lieu of flowers donations can be made to St. Jude Children’s Hospital in her name.

Carmen Fernandez, 88, of Port Arthur passed away on Tuesday, May 21, 2019 at the Medical Center of Southeast Texas... read more