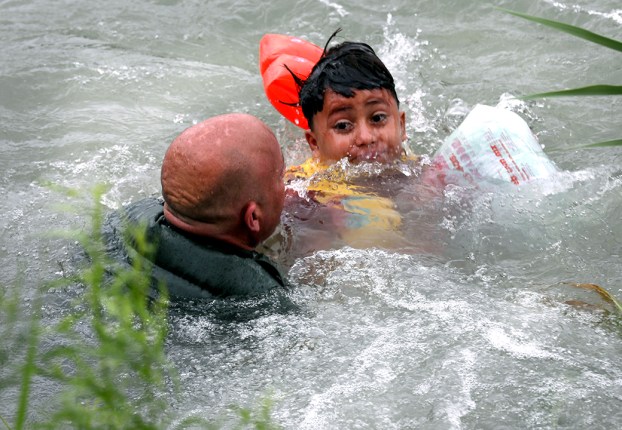 In this Friday, May 10, 2019 photo, Border Patrol Agent Brady Waikel rescues a 7-year-old boy from Honduras after he fell out of a makeshift raft and lost hold of his mother as Border Patrol agents respond to rafts crossing the Rio Grande River near Eagle Pass, Texas. (Bob Own/The San Antonio Express-News via AP)

EAGLE PASS — New photos capture the dramatic rescue of a 7-year-old boy from Honduras who nearly drowned in the river separating the U.S. and Mexico until Border Patrol agents rescued him.

The San Antonio Express-News reported Wednesday on the rescue of four adults and five children who tried to cross the Rio Grande in inflatable children’s pools near Eagle Pass, Texas. The pools capsized. Agents pulled the group out of the water Friday and eventually took them into custody.

The river is especially strong between Eagle Pass, Texas, and Piedras Negras, Mexico. An adult and three children were recently swept away trying to cross the river nearby; all four are presumed dead.

The Border Patrol made 99,000 apprehensions on the southern border just in April. Most were adults and children from Central America expected to seek asylum.

Texas tax collectors predict another $500 million for the state budget