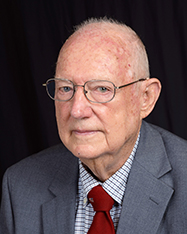 He was born May 1, 1929 in Corey, Louisiana to Gus Gaugh and Angie Bernice Harris Gaugh.

Curtis attended elementary school in Caldwell Parish, Louisiana and graduated from Nederland High School in 1947. He was accepted as a Pipefitter apprentice with Local #195 then at Lamar Jr. Vocational College.

He was a United States Navy veteran, serving four years as a Radarman in the Combat Information Center on board a Destroyer Minesweeper in the Korean Combat zone.

Curtis had met his wife, Wilma, before leaving for overseas, and were married on November 1, 1952 in Bowling Green, Ohio after they were both discharged.

They moved from Michigan to Nederland in December 1952 where he worked construction, went to work at the Port Neches Rubber Plant and then United States Rubber as a contractor for the government to produce synthetic rubber. He retired after 42 years of service.

He was a member of Holy Trinity Episcopal Church since 1959 serving on many committees during the years. He was also a delegate to Diocese Council several times, Lay Reader, Chalice Minister and Eucharistic Lay Minister for shut ins and home bound church members and active in Faith Alive renewal for over four years.

Curtis began donating blood during his time in the U.S. Navy and was a regular at Life Share Blood Center having contributed over 10 gallons of blood by his 76th birthday.

A Memorial service will be held at 2:00 p.m., Thursday, May 9, 2019 at Holy Trinity Episcopal Church in Port Neches with Reverend Mark Chambers officiating.

Curtis was preceded in death by his wife of 64 years, Wilma Marie Gaugh, and daughter, Cynthia Marie Gaugh Seils.

In lieu of flowers, friends wishing to make memorial contributions may send them to: Holy Trinity Episcopal Church Foundation or the Charity of Choice.

DEATHS Jeanne Bizot DeCourt, 90, of Port Arthur passed away on Friday, May 3, 2019 at The Medical Center of... read more