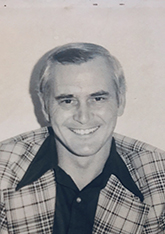 Wilton Eldred McDaniel, 82, passed away peacefully from a heart-related illness at Hospice in Las Vegas , Nevada on April 26th, 2019.  He was born on March 12th, 1937 in Marlin, Texas to Wilton Thomas and

Lois Oliver McDaniel.   The family moved to Port Arthur and he graduated from Thomas Jefferson High School in 1955.  He received a bachelor’s degree in Business from Lamar University in 1959.  He went on to be employed by Burroughs Corporation, (now Unisys) as a lead sales director.  He received several accolades for his business performance and eventually owned a business entitled Mifax Systems of Beaumont.  He retired from this area in 1992 to live out the rest of his life in Las Vegas, Nevada.

Wilton was preceded in death by his sister, Carmen McDaniel.

A private family service will be held in Las Vegas, Nevada at a later date.  Online donations to the American Heart Association in Wilton’s name may be made in lieu of flowers.