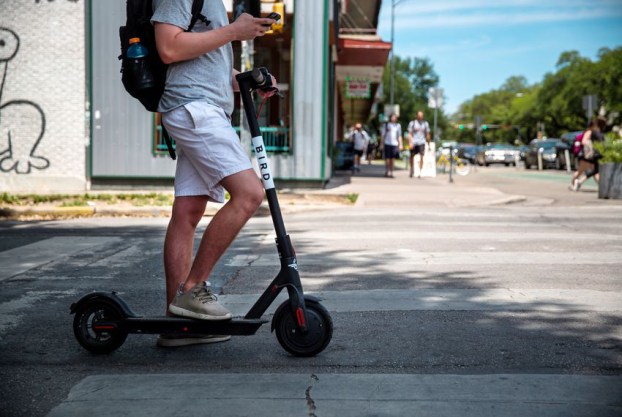 Motorized scooters on the University of Texas at Austin campus. (Shelby Knowles for The Texas Tribune)

Electric scooters could soon be kicked off Texas sidewalks, if state Senate gets its way

Texans could soon be banned from riding electric scooters along sidewalks in the cities where the divisive devices have recently popped up. The Texas Senate on Wednesday passed a bill that would add that prohibition and require that scooter users be at least 16 years old.

Citing safety concerns, some local governments have imposed restrictions on electric scooters, like creating restricted areas where they can’t be used — but Texas legislators wanted to impose minimum statewide guidelines.

“It’s like the wild, wild west out there with no rules,” said state Sen. Juan Hinojosa, D-McAllen.

Senate Bill 549, authored by Dallas Democrat state Sen. Royce West, would also prohibit more than two people from riding a scooter at once. Plus, the bill adds new guidelines for parking, so a rider can’t obstruct a road or sidewalk when they finish their ride.

The scooters are popular among riders who want a cheap and convenient way to get around. People pay a small fee to grab a scooter and go, and they can park it on the sidewalk once they’re done. But many urban Texans have complained that riders endanger pedestrians and leave the machines in places that block paths.

State Sen. Bryan Hughes, R-Mineola, decried the prohibition from riding on sidewalks, saying that there are some situations where it’s safer for a rider be on the sidewalk than on the street. But Houston Republican state Sen. Joan Huffman, who says she’s been nearly hit three times by a scooter, said the sidewalk ban is key for safety.

“What about my personal liberty, my personal safety, when I’m walking on a sidewalk?” she said. “Not a side scooter-way, a side runway, or a side speedway — but a sidewalk.”

West’s bill would allow counties and cities to add further scooter restrictions, like increasing the age limit, requiring helmets or adding a higher criminal or civil penalty for not complying with the rules.

Most of the bill — like the age limit and the prohibition from riding on sidewalks — would only apply to rented scooters, not personal scooters. The bill passed in a 20 to 11 vote, and it now moves to the House for their consideration.

Government to house more immigrants in tents at the border

EL PASO — About 50 asylum seekers stood this week in a circle near a bridge between the U.S. and... read more