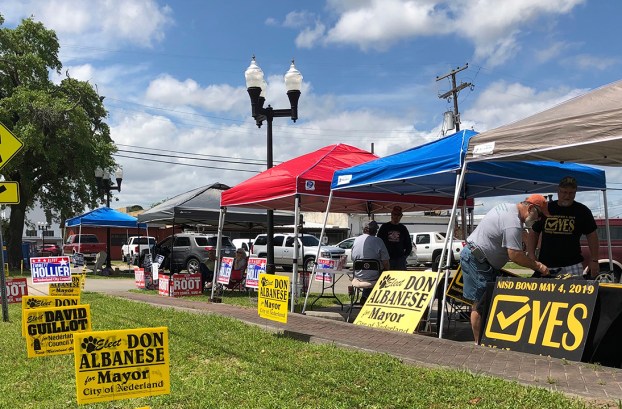 NEDERLAND — With the $155.6 million Nederland Independent School District bond issue leading the ballot, voters went to the polls in record numbers for early voting. The final day for early voting saw a turnout of 628 bringing the total to 3219.

The bond issue has been polarizing within the school district lines with separate groups promoting and opposing.

Many residents have been trying to pass a bond to build new schools in the district for a decade to no avail.

The bond issues on the ballot would pay to build a new high school along with upgrades to the other campuses and upgrades to Bulldog Stadium.

Don Albanese and Jeff Ortiz are on the ballot, competing to become the next mayor.

David Guillot and Sylvia Root are up for the Ward 4 City Council seat.

The first day of early voting totaled 454 ballots cast, which City Clerk Gay Ferguson said was the largest number she had seen in her 10 years with the city. The following day, the number of voters climbed to 601 before the polls closed. The numbers declined as the week wore on and early voting continued until Tuesday’s total of 628.

Election Day is Saturday. Those who have not voted but still wish to can go to City Hall on 13th Street. Polls will be open between 7 a.m. and 7 p.m.

Be sure to visit the Port Arthur News Facebook page and twitter (@panews) for election results and reactions from candidates in real time.

By Alex Samuels The Texas Tribune texastribune.org Less than 24 hours after the Texas House gave preliminary approval to a bill reducing... read more