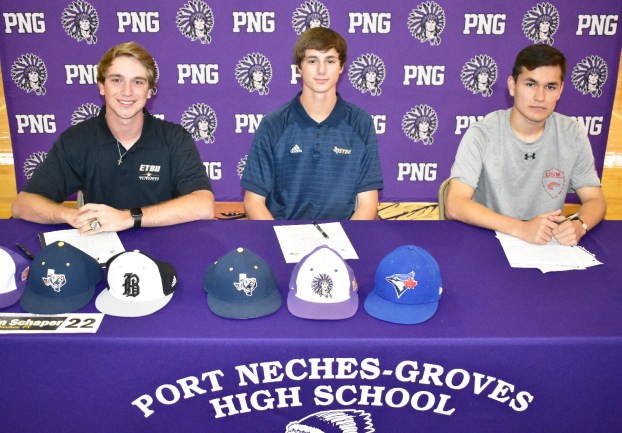 From left, Austin Schaper and Grant Rogers signed with East Texas Baptist University for baseball, and Sergio Aguilar committed to the University of the Southwest for soccer. (I.C. Murrell/The News) 3-27-19

Austin Schaper and Grant Rogers made it a priority to go to the same university to continue their baseball careers.

“We sure did,” Rogers said. “We wanted to be with each other and see each other progress as teammates and as men.”

Both signed their letters of intent with East Texas Baptist University on Wednesday in a ceremony shared with soccer standout Sergio Aguilar, who committed to the University of the Southwest in New Mexico.

Both have found success as part of the Indians’ pitching rotation. Rogers has thrown two complete-game shutout victories this season, the latest an 8-0 win over Dayton on Tuesday.

“I took the visit, and after looking at all the dorms and all the facilities they have, it really felt like home,” Schaper said. “I knew that’s where I wanted to be.”

ETBU, based in Marshall, is 17-8 and 8-4 in the NCAA Division III American Southwest Conference.

Aguilar, an attacking midfielder, has played a big role in the Indians’ run to the District 21-5A championship this season. PNG will take on Goose Creek Memorial at 7 p.m. Thursday at the Lamar University Soccer Complex, located next to the LU Softball Complex on East Cardinal Drive in Beaumont.

“I’m happy to sign with them,” Aguilar said. “I’m ready to do good things with them and try to play the best I can over there, try to build myself up as a person and an athlete,” Aguilar said.

PORT NECHES — A little more than two months ago, Port Neches-Groves went through a seven-match slump. A 4-0 record... read more