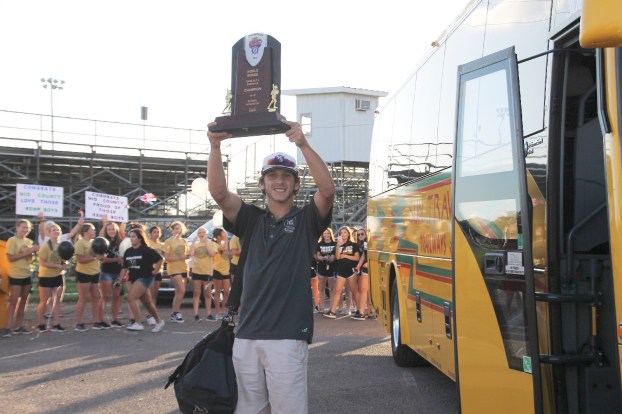 Kody Kolb of Mid-County hoists the Babe Ruth 16- to 18-year-old World Series trophy after deboarding a bus from a Houston airport on Aug. 13, 2017, at Nederland High School, his alma mater. (I.C. Murrell/The News)

Nearly two years later, the Southwest U.S.’ best 16- to 18-year-old teams in the league will descend on Mid-County — Nederland, to be exact.

“It’s great,” Mid-County SBR President Jimmy Collins said. “It’s something we want to do. We got in line and bid for it.”

Mid-County will aim for a return trip to the World Series by winning the Babe Ruth 16- to 18-year-old Southwest Regional on its home field — Nederland High’s Metreyeon-Delahoussaye Field. The tournament is scheduled for July 12-16 and will include approximately 10 teams from Texas, Arkansas, Louisiana, Mississippi and Alabama.

Collins estimated Mid-County’s bid at $10,000 to host, which goes toward paying Babe Ruth hosting fees, umpires and other operating expenses. The league has secured the sponsorship of 5 Point Credit Union and is seeking more corporate sponsors.

Mid-County board member Clint Landry and Collins said their organization usually gets to host a regional every five to seven years. The hosting rights give their all-star team an automatic bid in the regional.

“It’s a good honor,” Landry said. “We stay home this year. Kids get to sleep in their own beds.”

Landry also believes the regional will be a good recruiting tool for older high school baseball players to the league, as younger players usually spend their summers on travel teams in search of scholarship offers.

Unlike in past years, host families are not needed for players in the Southwest Regional (but are still used for World Series tournaments). Activities for the 2019 regional, Collins said, will also include a picnic and skills contest before the tournament play begins.

The Southwest Regional has produced at least nine world champions since 2001, most of them coming from Mobile, Alabama. Since that coastal city is hosing the World Series in August, another Alabama representative could fight for a World Series spot in Nederland.

To ask about sponsorship opportunities, call Collins at 350-1745.

The celebration could hardly be contained. The emotions were flowing. Port Neches-Groves still has a few matches remaining in the... read more