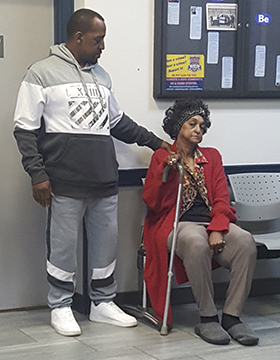 Lyons’s family: No closure yet

But instead of bringing closure to the family, they have more questions.

“We saw footage of the video and it wasn’t what we actually thought,” Andre Molo, brother of Lyons, said.

Molo and other family members had heard Lyons lunged at the officer and that he had lifted the machete up. But none of that was revealed when they saw the video, they said.

Instead, they said, they saw the officer, whose name has not been released, jump out of his patrol unit with his gun drawn and use vulgar language.

The family said they do not believe the shooting, which they said happened within seconds of the officer jumping out of the vehicle, was justified.

“It made me sick to my stomach. I wanted to throw up, literally,” Molo said while surrounded by family at the Port Arthur Police Station on Wednesday night, where police shared the video with them. “I’ve done my best. I’ve been very, very, very peaceful about the whole thing. I’m not getting what I thought I would get — closure.”

“I feel empty right now. They took something from me I’ll never get back,” Singleton said. The grieving mother said she has not been able to sleep well since the shooting. “It will be a long night waiting for tomorrow,” she said.

The family had been asking to see the video since the shooting and amped up their requests when the officer involved was “no billed” by a Jefferson County grand jury recently, essentially clearing him of criminal wrongdoing.

The family, along with the local NAACP chapter, was to hold a protest Thursday but that’s been postponed, Molo’s wife, Alicia Valentine, said. The family is set to meet again at the police station Thursday and “hopefully get some answers.”

Police have not said why the officer was in the 1600 block of Kansas Avenue that day when he encountered the Lyons.

Police contend Lyons was carrying a large weapon — the family later identified that as a machete — when the officer ordered him to put it down. Police say he refused and continued toward the officer, who then fired at him.