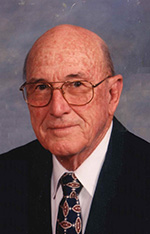 Ross D. James, Jr., age 93 of Mt. Orab, Ohio, died Sunday, January 6, 2019 at his residence. He attended Texas A&M University, was a member of the Corps of Cadets and graduated in 1946 with a degree in Chemical Engineering.  He was a loyal Aggie his entire life. Ross followed his father into petroleum refining at the Gulf Oil Corp. His career took him and his family to Philadelphia and then to Seoul, Korea, where he was Vice President of Engineering.  Later he was transferred to California and Ohio where he was a Refinery Manager. He was a member of the Methodist church, an avid golfer and loved jogging, biking, boating and camping. Most of all he loved spending time with his children and grandchildren.  He retired from Gulf Oil (now part of Chevron) in 1983 and settled in the Houston area. During retirement, he enjoyed substitute teaching with Humble ISD for over 16 years. Mr. James was born April 6, 1925 in Port Arthur, Texas the son of the late Ross D. and Ruth (Cross) James, Sr. In addition to his parents, he was preceded in death by his  wife – Verna (Davidson) James, whom he married on New Year’s Eve in 1949 and they raised two daughters and twin sons while traveling the world together. His son – Richard James also preceded him in death.

Mr. James is survived by his children – Holly Cahall and husband Grant of Mt. Orab, Ohio whom he lived his final years with, Robert James of Houston, Texas and Judy Celestine of Arizona; five grandchildren – Dylan Cahall and wife Janelle of Cincinnati, Ohio, Benjamin Cahall of Amelia, Ohio, Stephanie Sprinkle of Arkansas, Heather Sprinkle of Missouri and Erin Sprinkle of Ohio and two great grandchildren – Erick and William Engler.

A Celebration of Life Service will be held on Saturday, February 16, 2019 at 2:00 PM at Greenlawn Memorial Park in Groves, Texas.

DEATHS Agnes Bryant, 86, of Beauxart Gardens, Texas passed away February 11, 2019. Arrangements are under the direction of Melancon’s... read more