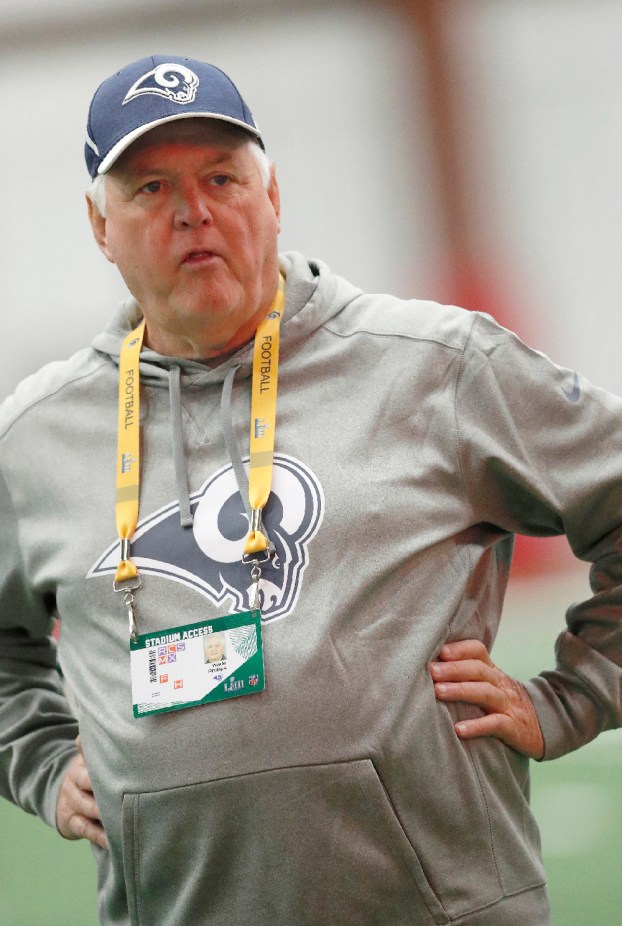 ATLANTA — Wade Phillips doesn’t understand why everybody is so impressed by his ability to bridge generations of people and football knowledge with equal aplomb.

The Los Angeles Rams’ 71-year-old defensive coordinator, who graduated from Port Neches-Groves High School in 1965, sees nothing unusual in his ability to quote lyrics from a month-old Future song right after walking off the team plane at the Super Bowl wearing his 10-gallon cowboy hat and an ancient, iconic sheepskin coat once owned by Bum Phillips, his late, great father.

And though he eagerly makes granddad jokes about his advancing age and his millennial boss, Sean McVay, Phillips is undeniably still at the peak of his profession.

The Rams (15-3) are coming off two outstanding defensive postseason performances as they get ready to face New England and Tom Brady, who had one of the worst outings of his playoff career against Phillips’ defense.

During 41 seasons in the NFL, Phillips has survived multiple firings and several unsuccessful head coaching stints to become a well-traveled defensive mastermind. He isn’t the type to lecture youngsters on his accumulated wisdom, but a few simple truths underline his life’s work.

“You have to be able to adjust,” Phillips said. “You have to learn and grow and get better. That’s what coaching is about. Life, too. The game isn’t waiting around for you. It’s going into the future.”

Part of Phillips’ future is Future, the Atlanta rapper who gets played in the Rams’ training complex. Phillips says he picked up a few bars from “Rocket Ship” this month and then dropped a verse — “I’ve been poppin’ since my demo” — on a disbelieving Aqib Talib for a team video Monday.

But Phillips also carries the accumulated wisdom of his past into this late-career renaissance.

After making the Super Bowl once in his first 37 seasons of NFL coaching, Phillips is back in the big game for the second time in four seasons. He won his first championship ring with the Denver Broncos just three years ago.

“We try to let the guys know you have to appreciate this opportunity,” Phillips said. “You don’t know if it’ll ever happen for you, and they’re getting it now. Even if you’re a younger player, you can understand that, I think. So we just remind them.”

Phillips’ clever expeditions into another generation’s culture happen too often to be just a goof. He is genuinely interested in learning about his players’ experiences, just as much as he was in the late 1970s as a 30-year-old assistant under his father with the Houston Oilers.

While Phillips listens to whatever music is playing at the Rams’ training complex, he prefers Drake and likes Migos. He plays video games with his grandson, and he showed up at training camp last July with a “Fortnite Legend” T-shirt, claiming his squad would probably win a Battle Royale if he tried.

When the Rams took the arena stage at media night, Phillips gleefully shot video on his phone for his popular Twitter account, which is full of SpongeBob GIFs and self-deprecating humor .

“I love this,” he said. “I love the camaraderie. Some of the guys from my Houston Oilers team, [safety] Vernon Perry and Dr. Doom [Hall of Fame linebacker Robert Brazile] and those guys, I’m still in touch with them. We do a thing where we buy bicycles for kids. All along the way, I’ve had players that I’ve been close to, and a lot of coaches. Those friendships are life’s meaningful things, and that’s what I’ve learned.”

Unsurprisingly, Phillips is universally popular with his Rams. Talib agreed to move from Denver to Los Angeles partly because he would be reunited with Phillips, and he joked that his eventual retirement plan is to “just chill with Wade.”

Cornerback Marcus Peters, who has clashed with coaches in the past, would love to get in on that.

“When you get to spend time with a guy who loves the game like that, and who’s so honest and genuine, you love that,” Peters said. “Yeah, we’ll hang out. Have a few drinks, and let’s groove.”

Phillips jokes that having All-Pro defensive lineman Aaron Donald on his roster has turned him into a genius, but he quickly assembled a solid unit this fall after the Rams made big offseason changes to his 2017 defense, including the departures of leading tackler Alec Ogletree and top cornerback Trumaine Johnson.

The Rams’ revamped pass defense struggled at times during the season, but has been mostly solid ever since Talib returned from injury in December to renew his partnership with Peters. Talib excelled in Phillips’ scheme for the NFC title game against New Orleans’ Michael Thomas, who had only four catches after cutting up Los Angeles for 211 yards receiving when the Saints beat the Rams earlier in the year.

While the Rams’ performance against the running game hasn’t been dominant this year, they’ve stopped their two postseason opponents’ ground games cold. Even while facing Ezekiel Elliott, Alvin Kamara and Mark Ingram, the Rams have allowed just 98 yards rushing in their two playoff games combined.

Phillips’ defenses historically have struggled against New England — just like almost everybody else’s defenses — but his Denver Broncos thoroughly stifled the Patriots three years ago to reach the Super Bowl. Phillips isn’t promising a repeat with the Rams.

When told about Talib’s faith, Phillips replied: “Oh, he knows I don’t think a whole lot.”

Miya Crump and Moe Kinard each scored more than 20 points, and Lamar overcame a tough second half of shooting... read more