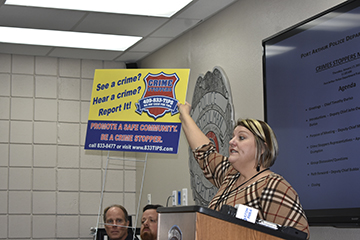 April Tolbert with Crime Stoppers of Southeast Texas, presents information on the program during a meeting at the Port Arthur Police Station Thursday. Mary Meaux/The News

A renewed push to educate the public in Port Arthur about Crime Stoppers of Southeast Texas is underway.

Representatives of the non-profit organization and Port Arthur police led a discussion with members of the Police Chief’s Advisory Board, representatives of local apartment complexes and others at the police station on Thursday.

A focus of the meeting was to arm property managers with the necessary information for them to bring back to their work place and share information.

Deputy Chief Michael Fratus explained that Port Arthur once had an active Crime Stoppers program but it dissolved some years ago. Then Crime Stoppers moved to a more regional approach and operates in Jefferson, Orange and Hardin counties.

“Law enforcement doesn’t drive Crime Stoppers,” Fratus said. “As far as this organization, it is built up of local interested people.”

At some point in time leaders noticed there just weren’t many tips coming in from Port Arthur, although there was plenty of crime.

“Last year we had somebody from the FBI come to one of our board meetings and said thanks to anonymous tips they found someone who was building a bomb,” Tolbert said. “They (FBI) had no other information this was happening. It was someone who saw something they thought was suspicious and called.”

Crime Stoppers is regulated by the governor’s office and anonymity is guaranteed. No identification can be revealed about that person, nothing can be called into a court of law. Crime Stoppers has been around since 1981 and there’s never been a reported case of a tipsters identification being discovered, she said, adding that this is a proven track record that shows the program works.

Here’s how it works:

Sometimes a person will call and give their name and address and that information is “scrubbed” before it goes to law enforcement.

“Tolbert said the process is anonymous and doesn’t matter if your phone has GPS.

There are several ways to make a tip, call the 833-TIPS number, go to the website or download the P3Tips app.

Port Acres area resident Chuck Vincent said the app is user friendly and he has shown the app to members of his community.

Businessman Fred Vernon said he believes Crime Stoppers is on the right track with the app. He also would like to see the Crime Stoppers information brought to pastors in the city and schools as well. 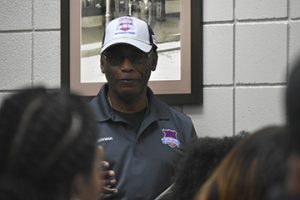 Jana Barnes with Avery Trace Apartment complex said with two murders in 18 months they have spent thousands of dollars for security there to ensure the residents are safe. She also asked Chief Tim Duriso is and when the department will bring back the Street Crimes Unit.

Duriso said there is a promotion ceremony coming up next week and that he plans to bring the unit back.

Genelle Scott with Louis Manor Apartments took notes during the presentation and is excited to get this implemented in the community.

Louis Manor is on the West Side of the city in an area that in previous years saw plenty of violence. Management pays for an onsite officer to deter crime and works with the police department. She said they had a good year in 2018 and looked for better days.

Superintendent Mark Porterie was in attendance and went away with information on Crime Stoppers. He plans to implement the program immediately. 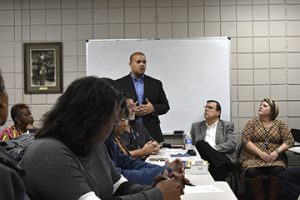 Port Arthur Mayor Derrick Freeman introduces himself to the crowd during a meeting about Crime Stoppers of Southeast Texas at the Port Arthur Police Station Thursday.
Mary Meuax/The News

Mayor Derrick Freeman said he is pleased to have Crime Stoppers back.

“It’s long overdue,” Freeman said. “They do a lot of great work.”

And with Crime Stoppers being a 501c3 organization he said he would like to see the community and business people make donations, adding that maybe the City Council could do so as well.