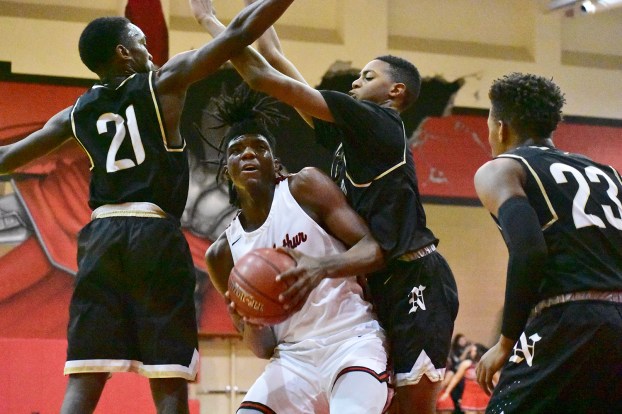 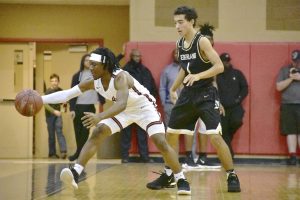 Armand Callihan of Memorial saves a ball from going out of bounds while pressured by Bryce McMorris of Nederland in the second quarter Tuesday in Port Arthur. (I.C. Murrell/The News) 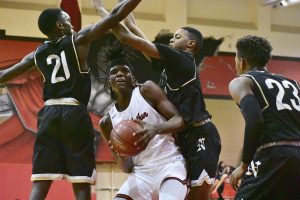 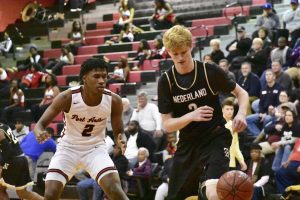 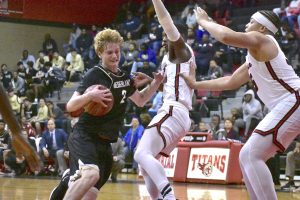 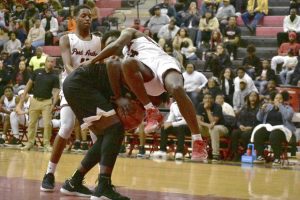 Colton Mitchell of Memorial mis-times his jump and falls on Da’Reion Jones of Nederland for a foul in the second quarter Tuesday in Port Arthur. (I.C. Murrell/The News) 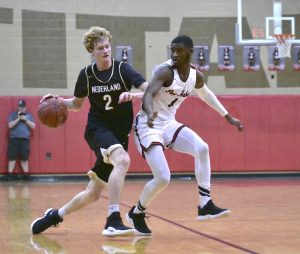 Hayden Hefner of Nederland tries to shrug off Steven Wilson of Memorial during the first quarter Tuesday in Port Arthur. (I.C. Murrell/The News) 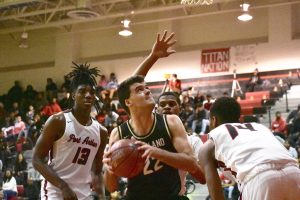 J.B. Rahe of Nederland goes back up for a layup triple-teamed by Memorial in the second quarter Tuesday in Port Arthur. (I.C. Murrell/The News)

Had Memorial not gone 7 for 7 from three-point range or led by 18 points in the first half alone, Tuesday’s home game against Nederland might have produced a different result.

Steven Wilson scored seven unanswered points after Nederland took a lead early in the fourth quarter, and the Titans hold on to take a 58-57 win Tuesday night. Wilson finished with 15 points.

The Titans will be off Friday. But they can celebrate knocking off the Bulldogs for the fifth straight time. (Nederland last beat Memorial in December 2015, when the Titans were in 6A.)

“We’re getting ready for Barbers Hill already, and then everybody else after that and the playoffs,” said Wilson, who canned three treys.

Memorial raced to a 12-3 lead within the first 4 minutes, knocking down four straight three-point shots in the process. Jaden Conner had three treys in the first half and wound up with 10 points.

“We didn’t realize they were going to shoot that well,” Bulldogs coach Brian English said. “Lot of credit to those guys tonight. They were ready to play, they made some big shots, and I think that was the difference in the game.”

Nederland point guard Joseph Gipson scored all of his 18 points on three-pointers, including back-to-back buckets to pull the Bulldogs within 16-11. The Titans got their inside game going as well and used a man-to-man defense to hold the Bulldogs to two field goals in the second quarter as they built a 33-15 lead with 4:24 remaining.

It would be 9 minutes before the Titans scored again. The Bulldogs contained their post players inside, and Memorial went 1 for 4 from the perimeter in the second half.

Nederland managed to get to the free throw line and pulled within 33-21 at halftime, but made only 9 of 20 free throws for the game. Memorial was 12 for 24.

The Bulldogs delivered their own punch with a 10-0 rally keyed by back-to-back Gipson three-balls. They took their first lead, 39-37, after a Cedric Pete trey, but a Colton Mitchell putback and Clover free throw put the Titans back ahead at period’s end.

“That’s a tough team,” Titans coach Alden Lewis said of the Bulldogs. “They have a good coach. They’re resilient. They never quit. They never gave up, and they stayed in the game.”

Then Wilson took over.

The Titans never led by more than seven in the final 8 minutes and had to weather a 16-point effort by Hayden Hefner. Bryson Garrett uncorked a running three-pointer from about 30 feet before the buzzer to bring the Bulldogs to within one.

Kenneth Lofton Jr. had 12 for Memorial.

**UPDATE: Corrects player who made final shot for Nederland**

One more victory, and Lamar State College Port Arthur would have had six in a row. Not only that, it... read more