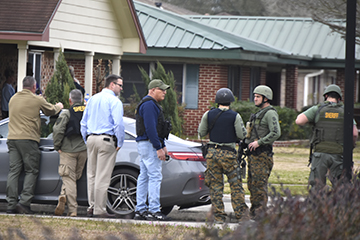 Jefferson County Sheriff’s Office SWAT team members congregate in a central area on Bella Vita off Merriman Street as they work to coax a man from a home on Tuesday. Mary Meaux/The News

All clear after SWAT standoff in Port Neches

PORT NECHES — No injuries were reported after Ridgewood Elementary School and some neighboring homes were evacuated as SWAT worked to coax a man from a home on Tuesday.

Mental health deputies with the Jefferson County Sheriff’s Office attempted to serve a mental health warrant around 1 p.m. to a man, whose name has not been released, at a home in the 2700 block of Merriman Street. 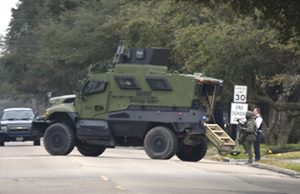 The Jefferson County Sheriff’s Office’s tactical vehicle was parked in the middle of Merriman Street in Port Neches as SWAT worked to coax a man from a home on Tuesday.
Mary Meaux/The News

The man, who is in his 30’s and lives with his parents, reportedly armed himself and refused to come out of the house, JSCO Capt. Crystal Holmes said.

The man’s parents got out of the home and told law enforcement that he had weapons.

Holmes said the SWAT team practices twice a month and was practicing when called out to the scene.

Port Neches police were notified of the incident and helped set up a perimeter and handled the evacuation of the school. The normally peaceful area looked unfamiliar with armed SWAT members and the sheriff’s office’s tactical vehicle parked in the middle of the street.

Parents with children were seen walking down the sidewalks and cars lined the school driveway where students were released. 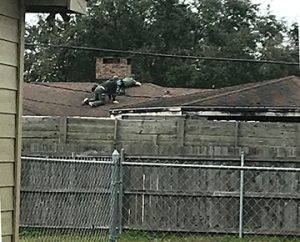 Jefferson County Sheriff’s Office SWAT team members can be seen on the roof of a home during a stand-off on Merriman Street in Port Neches on Tuesday.
Courtesy photo

Port Neches-Groves Independent School District Assistant Superintendent Julie Gauthier said the early release of students was done out of an abundance of caution and the school was not in any danger.

SWAT team members tried to make contact with the man using a speaker, which could be heard throughout the neighborhood. The first asked the man to “pick up the phone” and later to come the door with nothing in his hands. After about two-and-a-half hours the man peacefully surrendered.

Holmes said the mental health deputies work in conjunction with MHMR, or Mental Health and Mental Retardation services, and inmates in jail facilities. They also follow-up with these persons as part of the job.

“We don’t want someone to just come in to the facility and leave,” she said adding they want to walk through the process with the individual, making sure they are ok, getting counseling and more.

PORT NECHES — There was a common theme at the Port Neches Chamber of Commerce 78th Annual Banquet on Monday.... read more