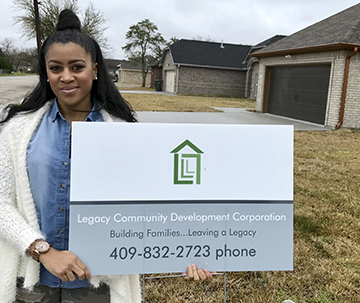 Brittani Collins of Legacy stands on Sixth Street, where the corporation, like the city of Port Arthur and Port Arthur EDC have been building new homes. Ken Stickney/The News

Legacy Community Development Corp., which is developing up to 30 new homes for low- and moderate-income families in downtown Port Arthur, will host an open house from noon-6 p.m. Friday.

The homes will be among 30 to be built between Fifth and Seventh Streets and Nashville and Atlanta Avenues. They represent the city’s erstwhile effort to lure residents downtown in an effort to breathe new life into the area. Most of the homes, the city has said, will have three bedrooms, two baths and about 1,300 to 1,400 square feet.

“This is one way to bring rooftops into our downtown area,” said Ron Burton, assistant city manager. “Businesses will follow, the rehabilitation of old buildings will follow. Property values will rise.”

Brittani Collins of Legacy said Wednesday that prospective buyers must be of low to moderate income and must meet credit benchmarks before they can qualify for income-based assistance from the city of Port Arthur and Port Arthur Economic Development Corp. Those buyers must also go through Legacy’s program, which includes a course in homeownership, and attend homeownership counseling sessions.

Collins said an open house in the neighborhood in October drew some 400 people. She said there are some 300 prospective buyers on a waiting list.

Income benchmarks are $34,000 for a single person for Port Arthur assistance; additional assistance from EDC starts at $51,000 for a household of one. Vivian Ballou, executive director, said last summer that a family of four might have an income up to $70,000 and qualify. She called the program a “working family program.”

The homes are within walking distance of City Hall, Lamar State College Port Arthur, Woodrow Wilson Early College High School, the Museum of the Gulf Coast and other downtown businesses, agencies and landmarks. A neighborhood park was built in the area last autumn.

In recent months, the city has talked about homeowners who qualify for home buyouts qualifying for assistance to move into the homes downtown.