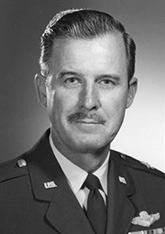 Major General (Retired) Harold Edward “Tom” Collins, died in San Antonio, TX, on November 24, 2018, at age 94 after a long and distinguished life.  He had resided in San Antonio since 1976, following his retirement from military life in 1975.   His beloved wife of fifty-seven years, Dorothy Rita Joffrion Collins, preceded him in death in 2005.  He was a lifelong practicing Catholic.

Gen. Collins was born on November 10, 1924, in Port Arthur, TX, the youngest of the five children born to the late Mr. and Mrs. Lionel A. Collins.  In addition to his parents and his wife Dorothy, Gen. Collins was preceded in death by his sisters Susie Collins McGill, Mary Julia Collins, and Pauline “Polly” Collins Watler, and by his brother Lionel A. Collins, Jr.  He is survived by his brother-in-law James Joffrion of Groves, TX,  numerous nieces and nephews, and friends from both military and civilian life.

Advancing from enlistee to two-star General, few Air Force careers were as distinguished as his.  During his Air Force career, Gen. Collins  was a Command Pilot with more than 6,000 flying hours who flew over 140 types of American and foreign aircraft.  His military decorations and awards include the Distinguished Service Medal, the Legion of Merit with two oak leaf clusters, Air Medal with two oak leaf clusters, Air Force Commendation Medal with one oak leaf cluster, and the Distinguished Unit Citation Emblem.   He was on the “short list” of Air Force pilots considered for selection as the original Mercury 7 astronauts in 1959, but was not selected.

He graduated from St. James High School in Port Arthur in 1941, and then attended Lamar Institute of Technology in Beaumont, studying engineering.  While a college student, he entered what was then known as the U.S. Army Air Corps in February 1943, during World War II.  After basic training, he was sent to Ft. Sill, OK, where he trained as a gunner in a 105mm howitzer field artillery battery.  In July 1943, he entered aviation cadet pilot training, which would prove to be the beginning of a highly decorated career as an Air Force pilot.  During WW II, he received his pilot wings and commission as Second Lieutenant in September 1944. Following photo reconnaissance and combat pilot training, he entered the European Theatre of Operations in February 1945, joining the 155th Photographic Reconnaissance Squadron.  He is credited with 11 aerial combat missions. After WWII ended in Europe, he remained as part of the occupation forces in Germany, serving with several tactical fighter groups.

Returning to the U.S. in June 1947, he was assigned to Wright Field, Ohio, where he served as an experimental test pilot until November 1954.  He played a key role as a test pilot in the development of the F-80, F-84, F-86, and F-100 aircraft.   During that assignment, in 1951, he headed a special project in Japan and Korea to equip RF -80 and F- 84 aircraft for in-flight refueling.  He supervised the modifications, trained the crews, and flew on the first known combat mission to use aerial refueling.

In September 1953, Gen. Collins established a new world speed record of 707.889 miles per hour for the 15 – 25 kilometer course in an F-86D Sabre and was awarded the General Electric Trophy.  In late 1953, he became the first American to fly a Soviet – built MIG – 15 fighter during tests of the aircraft on Okinawa following its delivery to South Korea by a North Korean defector during the Korean War.  He was the first American to fly a Russian YAK -23 fighter which was secretly flight tested in the US in 1953 and then returned.

In July 1954 he was re-assigned as Operations Officer of the 86th Fighter Interceptor Squadron of the Air defense Command in Youngstown, Ohio, and in June 1955 he became Commander of that Squadron.  After graduation from the Air Command and Staff College in July 1957, he returned to test pilot and command duties as Asst. Chief, then Chief of the Fighter Test Division, Aeronautical Systems Division (ASD) at Wright-Patterson Air Force Base, Ohio, where he participated in development of the F-101, F-102, F- 104, F-105, F- 106, and flight-evaluated numerous foreign aircraft.  In July 1962, he was reassigned to Edwards Air Force Base, California, to become Director of Flight Test Operations, Air Force Flight Test Center, and had a supervisory role in the operation of the rocket-powered X-15 research aircraft.

Gen. Collins entered the National War College, Washington, D.C., in July 1964, and after graduation in July 1965, he was assigned to Headquarters U.S. Air Force in the Office of the Deputy Chief of Staff, Research and Development, as the Deputy Chief, Aeronautical Systems Division, Directorate of Development. In July 1967, he was named Chief, Aeronautical Systems Division.  In October 1967 the Society of Experimental Test Pilots elevated him to the grade of Fellow.  This is the highest grade in the Society, and it is reserved for those test pilots who have made significant contributions to aviation.

His next assignment was overseas. From November 1969 to November 1970, Gen. Collins served the U.S. Strike Command as the U.S. Defense Representative to Pakistan, a position involving both military and diplomatic expertise.  His office was located in the American Embassy, in Rawilpindi, Pakistan, where the General and Mrs. Collins lived during that assignment.

From December 1970 to March 1972, Gen. Collins was the Inspector General, Air Force Systems Command at Andrews Air Force Base, Maryland.  In April 1972, he was assigned to Headquarters, U.S. Air Force, as Director of Development and Acquisition in the office of the deputy Chief of Staff for Research and Development.  In August 1973, Gen. Collins became the Asst. Deputy Chief of Staff, Research and Development.  He returned to Headquarters Air Force Systems Command in August 1974, as Chief of Staff.  He retired from active duty on September 1, 1975, ending an illustrious 32-year military career.

He was a graduate of the USAF Test Pilot School and St. Mary’s University with a Bachelor of Arts degree.  During 1966 he attended the Advanced Management Program at the Harvard Graduate School of Business, Cambridge, Mass.  Highlights of his Air Force career are displayed in the Notable People exhibit at the Museum of the Gulf Coast in his hometown, Port Arthur.

Funeral services will be held in Port Arthur, TX, on Tuesday, December 4, 2018, as follows: Visitation from 9:00 a.m. to 10:30 a.m., at Grammier-Oberle Funeral Home, 4841 39th Street; followed by Funeral Mass at 11:00 a.m. at St. James Catholic Church, 3617 Gulfway Drive; immediately followed by internment with full military honors in Calvary Cemetery,  3700 25th Street.  He will be buried beside the grave of his beloved Dorothy.