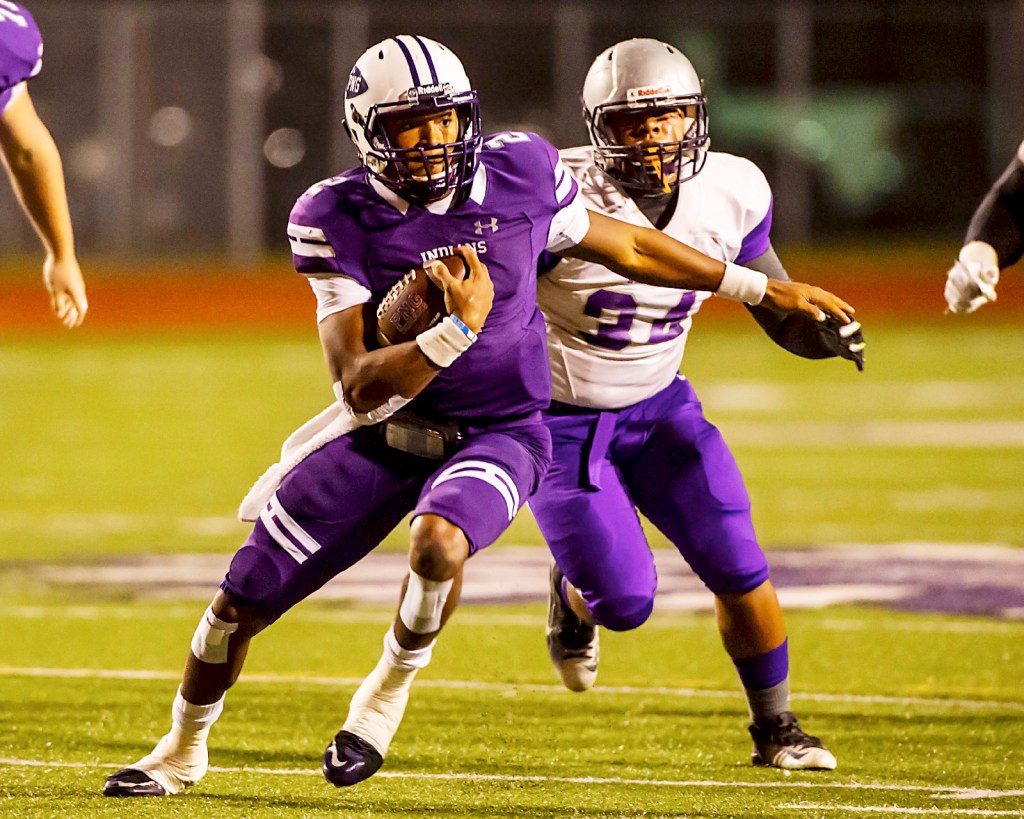 Port Neches-Groves’ Roschon Johnson (2) slips through the Northside defense for a long run during the first quarter Friday at The Reservation. (Brian Vincent/Special to The News)

PORT NECHES — Roschon Johnson put on a show for the home crowd one more time as the Port Neches-Groves Indians defeated the Houston Northside Panthers 48-7 at The Reservation on Friday.

Johnson finished the game 17 of 26 for 265 yards and four touchdowns. The Indian defense continued a bend-but-don’t-break mentality after forcing the Panthers to turn the ball over on downs in the red zone three times in the first half.

After forcing the Panthers to punt on the opening drive, PNG’s offense capped off an eight play drive with a 40-yard pass from Johnson to Jose Ceja to give the Indians a 7-0 lead with 6:11 left in the first quarter.

After another PNG touchdown, Northside put together a 13-play drive that took around 5 minutes off of the clock. However, the drive stalled after back-to-back sacks forced the Panthers to turn the ball over on downs.

The Panthers were able to force a three-and-out and took over on the Indians’ 47 down 14. On the first play of the drive, Northside running back Jaylon Travis took the ball 22 yards down to the Indian 25-yard line. Once again, the PNG defense held tough and didn’t allow another first down, forcing another turnover on downs. The Indians took over on their own 25. After a 40-yard pass from Johnson to Kaleb Wuenschel got the Indians to the Panther 20, Johnson found Wuenschel again in the end zone to give the Indians a 21-0 lead with 2:50 to go in the first half.

The Panthers only ran about a minute off the clock before turning the ball over on downs again. PNG took over at their own 23. After a few passes down field, the Indians were on the Panthers’ 9-yard line with about 0:15 to play.

Johnson broke containment and scrambled around before finding Ceja wide open in the back of the end zone to give the Indians a 28-0 lead heading into half time.

The entire PNG team came up big. The defense stopped the Panthers in the red zone multiple times and swarmed Northside’s quarterback. Linebacker Donovan Bergeron recorded a pick-six in the third quarter. Johnson had a signature night and was aided by Wuenschel, who had a breakout game against Nederland and continued to be a deep threat for Johnson Friday. Wuenschel finished the game with five catches for 110 yards.

Midway through the fourth quarter and the game well in hand, PNG head coach Brandon Faircloth pulled his starters except Johnson, who came off the field for a late substitution. The moment gave the home fans one last chance to cheer for the Texas commit.

“I didn’t give it to him,” Faircloth said of Johnson’s moment. “He earned it. He’s the greatest player I ever coached here and borderline the greatest player to ever play here. I wanted to give him a special moment where he can come off the field by himself. He’s done so much for our program and his legacy will live for a really, really long time. Everyone is going to talk about Roschon Johnson for a long time.”

PNG will play Lindale in a 5A Division II area round game at NRG Stadium in Houston next weekend, with date and time to be finalized.

There will be two days to buy tickets for the Indians’ next game. Tickets go on sale from 8 a.m. to 4 p.m. Tuesday. The second day will be Thursday during the Thanksgiving Day practice in the end zone on the field at The Reservation.