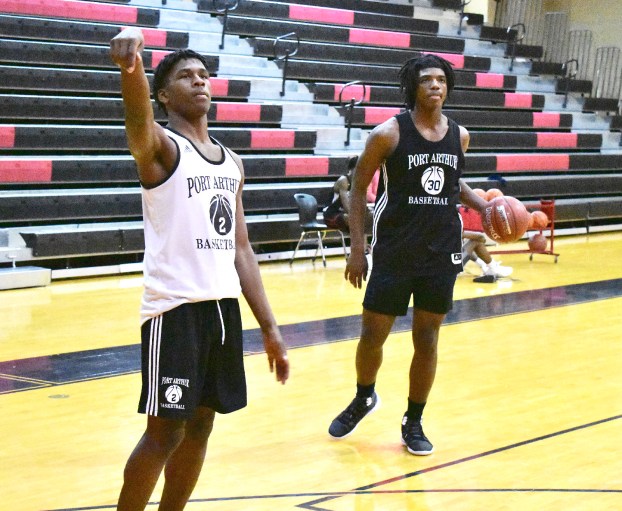 BOYS BASKETBALL: Weekend of champions: Titans tuned up for Tigers

Holding the UIL 5A title, the Memorial Titans aren’t backing down from any other state champions.

Meanwhile, at 1-1, they’re finding out who can form a new nucleus after losing nine to graduation.

Ahead of Saturday’s marquee battle with two-time defending 4A champion Silsbee, the Titans already met one titleholder this season.

Tomball Concordia Lutheran (now 5-0), last season’s TAPPS 6A champion, opened the Titans’ season with a 69-62 loss last Saturday at the Campbell Center in Aldine, but not before 6-foot-1 freshman guard Amaree Abram led Memorial with 22 points.

“It’s an adjustment period for him,” said Titans head coach Alden Lewis, who was promoted in May to replace current Humble Summer Creek coach Kenneth Coleman. “He’s adjusting to varsity, but he’s doing well and we expect good things from him in the future as well.”

On Tuesday, senior guard Steven Wilson hit a go-ahead free throw and scored a team-high 18 points in a 69-67 victory at 6A Cypress Lakes. Through those two games, junior forward Kenneth Lofton Jr. (13.5 points per game) and Clover (13 ppg) have scored consistently.

“Those two guys are pretty much big contributors to the team,” Lewis said of Wilson and Lofton. “We’re looking forward to more and great things from them. They’re going to be the guys to lead us, along with Nate and Jaden.”

Come Saturday, the Titans will get to play host to a championship team when the Tigers open their season.

“It’s going to be a competitive game,” Conner said. “Silsbee’s a real competitive team, and they’ve got most of their players back. We’re getting better together, and we’ve got to stop them from moving too fast.”

Silsbee began last season with an eight-point loss to Concordia Lutheran and six-point defeat to 6A power Atascocita, but finished 30-8 and successfully defended the 4A crown. The Tigers, who graduated six from that team, still bring back an experienced roster that will face road games at Beaumont United and Nederland before district, just to name a couple.

“Sooner or later, some have to graduate,” Tigers coach Joe Sigler said. “You just have to get your help from somewhere.”

Sigler will get his from recent Austin Peay signees Devon McCain and Jordyn Adams, both guards who averaged better than 20 points per game each as juniors.

“I’m anticipating a good game,” Clover said. “The fans … just the anticipation of playing against another state champ like Silsbee, and then to be so close to them, two teams in the 409 to play against each other, it’s amazing.”

Lewis is gearing for what he calls another challenge in a not-so-easy non-district slate.

“They present a great challenge for us early on in the season,” he said. “The third game of the season is not bad to be playing Silsbee. That will help us in the long run. That will help us in district and hopefully for our playoff run. It’s a great challenge for us. We’ll learn from it, and hopefully we can pull off a victory.”

FOOTBALL: Trip to NRG on line for Indians

If Port Neches-Groves wins Friday’s bi-district game at home against Houston Northside, the Indians will play at NRG Stadium for... read more