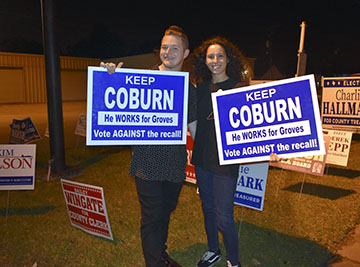 GROVES — A recall election to remove Cross Coburn from his Ward 1 Groves council seat has prevailed.

Even though he has lost his seat he still found lessons learned from the experience.

Coburn’s short tenure as councilmember has been challenging. He said humility is a great teacher and although he’s learned who he can trust he’s also learned to always put faith in people.

The openly gay Coburn came under fire after nude photos of him that he shared with a person he met on Grindr , a dating website, were sent to City Hall and to local news media anonymously asking if this was proper behavior for a city councilman. He believes he was “catfished” — or lured by a person using a fake identity. The photos were not published to the internet, only between Coburn and the person he met through the gay dating app.

But some Groves people were not pleased to hear of the issue they called morally wrong.

There was a meeting between Coburn and his attorney, a representative of the city’s human resources office, the mayor and police in which it was deemed that nothing illegal had occurred.

The longtime mayor, Brad Bailey, said at that time Coburn’s actions were unbecoming of a public official, regardless of age.

Groves resident William Lane Howlett came forward with a petition to recall Coburn from his seat and not long thereafter Bailey contacted the Rev. Joe Worley of First Baptist Church in Groves who acted as middleman between the mayor, Coburn and Howlett, who penned the petition — with the deal that if Coburn made a formal apology and resigned then the recall petition would not be circulated. This was on or about May 4.

The petition was turned in with the city clerk identifying a number of deficiencies. Howlett brought it back within the designated timeframe and the petition was certified and the recall election scheduled to occur during the general election.

The issue of the legitimacy of the signatures and petition was brought to court and Judge Donald Floyd of the 172nd District Court, who ruled in favor of the city in allowing the election to move forward.