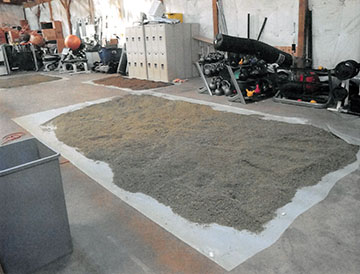 A plant material, which has been sprayed with chemicals, set out to dry in a warehouse in this photo provided by law enforcement. The photo is linked to an investigation into synthetic marijuana. Courtesy photo

The synthetic drug epidemic is not lost on the officers with the Port Arthur Police Department — they see it on the streets.

Users of the drug act erratically: Some grasp at unseen items like a pantomime, others dance in the middle of a street and still others will stand frozen in their tracks.

PAPD Officer Wendy Billiot said patrol receives most of the calls of people high on the drug in the Griffing Park area. A Griffing Park resident, who asked not to be named for fear of retaliation, spoke with The News last week about the epidemic. The issue has gotten so bad he has decided to move away.

He sees the drug users every day as they make their way through the tree-lined streets. Some of the users were squatting in a house on Wignall Avenue until someone came and boarded up the house and put ‘no trespassing’ signs out. Then they moved to a vacant house on Woodrow Drive, he said.

When asked if he believes the drug users are dangerous, he said “definitely.”

“You look at the way they are living and obviously will do what it takes to get that drug and from what I hear it’s highly addictive; one you start, you’re hooked,” he said.

He said he has seen some of the females of the group at nearby gas stations soliciting for prostitution. So, with the drug abuse and prostitution, who would want to let their children outside to play? he asked.

The Griffing Park resident posted a video of three men acting erratically and likely on synthetic marijuana. He also posted a photo of a young man who crumbled to the ground at the end of his driveway and lay tangled in a bicycle.

Billiot said it’s difficult to arrest someone on the drug for public intoxication because the high lasts only about 10 minutes.

“You may catch someone in the zombie state that fits the statute of public intoxication and take them in custody. You have to bring them to the hospital for medical clearance but by that time they are no longer intoxicated,” she said.

It’s a bit of a Catch-22 for law enforcement.

Deborah Verret, demolition inspector for the city of Port Arthur, said they occasionally get calls on squatters — people living in an unoccupied home or land.

If there is a squatter, the city health department will be called to see if the structure meets health requirements.

But, she said, they don’t always know if the person is a squatter and the home must meet certain criteria for being red tagged.

What qualifies is anything open and accessible, such as doors standing wide open or kicked off; or a burned structure that is listing or leaning more than 50 percent; or a building that is dilapidated and substandard, such as having broken windows, certain roof issues, siding falling off, etc.

If it doesn’t meet the standard, “we’re not going to red tag it,” Verret said.

She said the department gets calls from both citizens and the police department and they investigate but the structure must fit the criteria. If not, they will contact the individual who made the complaint if they left contact information or they will call police and let them know.

Things may be looking up for some in the Griffing Park area. Some individuals were evicted from a home on Woodrow Drive per the owner and with a police presence on Monday, PAPD confirmed.

New PA chief gets eyes on his city

Port Arthur Police Chief Tim Duriso isn’t one to just sit behind his desk. “I like to get out of... read more