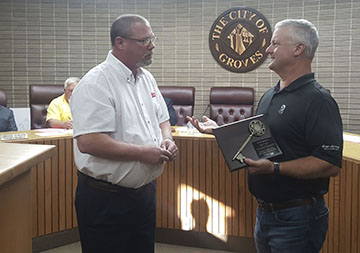 Mark Dixon, manager of Bruce’s Market Basket, left, receives the keys to the city from Groves Mayor Brad Bailey on Monday at city hall. Bruce’s is one of four local businesses recognized for their help during tropical Storm Harvey. Mary Meaux/The News

GROVES — The city of Groves continued its effort to officially recognize the businesses that stepped up and helped the city and citizens during Tropical Storm Harvey.

The latest to be recognized was Bruce’s Market Basket. Mark Dixon, manager of the store, was on hand Monday to receive the key to the city from Mayor Brad Bailey.

“They did a really good job of helping us out and they’ve done this before,” Bailey said referring to help given after Hurricane Rita in 2005.

Groves is not a shelter city but Harvey’s floodwaters led to some areas becoming unplanned shelters.

Bruce’s Market Basket stepped up and helped first responders and those that were rescued as well.

Other businesses receiving awards for assisting during Harvey include Domino’s, Groves Café and Dairy Queen.

“They are great all-around and the kind of businesses you really want to have in your city,” Sosa said.

Hundreds turn out for PAPD’s Trunk or Treat (see photos)