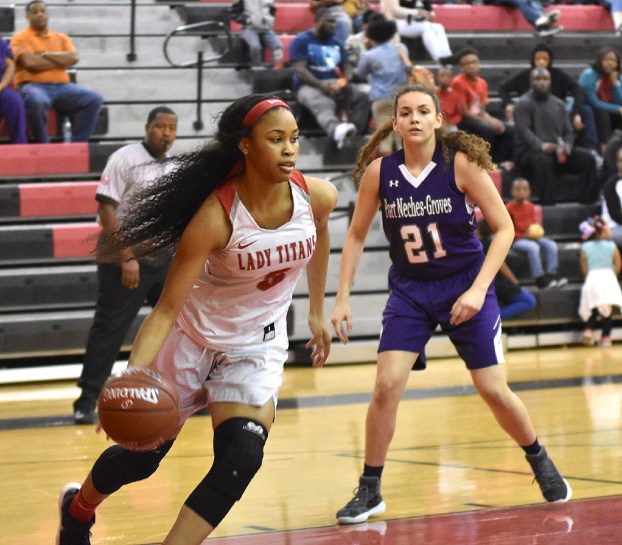 Julia Sion of Memorial clears out after a rebound as Chelsea Carrillo of PNG looks on during a Dec. 5, 2017, game in Port Arthur. (I.C. Murrell/The News)

The last time Memorial posted a winning record in girls basketball, Julia Sion was a freshman playing in Class 6A.

Three seasons later, the 6-foot-2 center is still a big presence for the Titans, who aspire to return to consistent winning ways under eighth-year head coach Kevin Henry.

“It will take a total commitment from all players and coaches in order for us to make history,” he said.

Making history at Memorial usually involves winning championships. The lady Titans last won a district title in Henry’s first season, sharing the crown with North Shore, and the school is more than seven months removed from winning the 5A boys basketball state title, the first for any athletic team since the Port Arthur high school opened in 2002.

Memorial, which played in District 22-5A the past two seasons, will seek a path to new prominence in girls basketball coming out of a different league. District 21-5A includes Barbers Hill, the Region III semifinalist which graduated McDonald’s All-American and current University of Texas post player Charli Collier.

Barbers Hill is favored to win 21-5A, with Memorial predicted second, according to a poll from the Texas Association of Basketball Coaches.

“I anticipate us making history this year,” he said. “One game at a time.”

To do that, Henry said, the Titans will have to avoid turnovers and score from the floor better than they did last season. Sion, who averaged 11 to 12 points and 10 rebounds as a junior, has become more of a complete player over the summer.

The Titan guards, which include seniors Emily McElroy (5-feet-8), Dakayla Miller (5-7) and Marceya Scott (5-6) and junior Jacqueline Gibbs (5-10), are a year more seasoned under Henry’s system and look to produce more on offense. Senior forwards Iyanna Brannon (5-9) and Darby Dugay (5-9) should play big roles as well.

“I imagine averaging maybe 60 points a game,” Henry said. “We were in a lot of close games, but we didn’t get over that hump.”

The Titans will open the season at home Friday against Kelly. Tipoff is scheduled for 6 p.m.

Like Memorial, PNG is seeking better fortune in 21-5A. According to the TABC district predictions, the Indians should get to the postseason as a third seed.

What Skinner likes most about them is their resilience and ambition.

“This team has always had a desire to be the best they can be,” she said. “They have very high expectations of themselves both on and off the court, which really make me proud, as their coach.”

The Indians boast plenty of experience in the post with seniors Harlee Barnwell (5-8) and Chelsea Carrillo (5-9). Junior guards Mollee Priddy (5-7) and Maylin Stampley (5-3) are proven scorers.

To make improvements, PNG will have to execute on offense and in transition defense, according to Skinner.

“I look forward to seeing what this group is capable of achieving this season,” she said. “I am very proud of their work ethic and ambition thus far and anticipate big things from them. I believe our kids are going to surprise a lot of people with their ability and play.”

Hagedorn guided Sabine Pass’ boys basketball team the past two seasons and coached the leading scorer in all of 2A, Daniel Sam.

He’ll try his hand at transforming the lady Sharks into playoff contenders.

“I really am enjoying their hustle and basketball IQ,” he said. “They are really buying into what we are trying to do right now.”

The players to watch are mostly young, though. Senior Jaizee Landry is leading a backcourt that includes a pair of freshmen in Yainn Zuniga and Nevaeh Jones, while juniors Brooklyn Dixon and Jamesia Jones look to be dominant in the frontcourt.

“A lot of teamwork, great defense and improved shooting,” Hagedorn says, will be key to a turnaround.

“I really think they are going to be more competitive than they have been in a long time,” he said. “I think we have a good group of young talent coming up, and I think that will definitely help us out throughout this year.”

They enjoyed plenty of success under JoLee Kolander, having gone to the UIL playoffs each of the past two years, But as Kolander became a mother late in the season, Robertson took over in the interim and BC eliminated Lufkin Hudson in last February’s bi-district game before running into Houston Wheatley.

“It will take chemistry and teamwork because we have eight seniors that are well-bonded,” Robertson said. In all, the Cardinals have 10 returning letterwinners.

Seniors Madison Fischer (5-7 forward), Rylee Oceguera (5-6 guard) and Caitlin Denison (5-6 guard) are the players to watch for Bridge City. The Cards will have to improve on handling pressure and making shots to be successful, Robertson said.

A questionnaire was not received from either Nederland or Hamshire-Fannett. The two teams will open the season against each other at 7:30 p.m. Friday in Nederland.

FOOTBALL: All over an iPad: PNG forfeits win over Crosby

Port Neches-Groves’ last-second football comeback win at Crosby on Oct. 12 will now go down as a loss. The District... read more