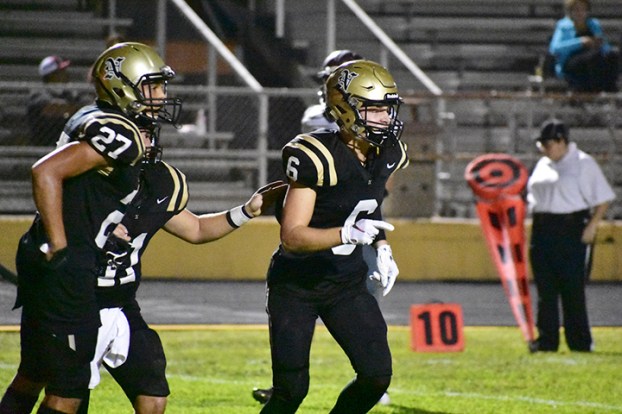 The Nederland Bulldogs are undefeated heading into Friday’s matchup against the Pirates in Vidor.

Nederland (7-0, 4-0 in District 12-5A Division II) is coming off a 55-21 win over Baytown Lee, but head coach Monte Barrow said his team can’t get caught looking ahead as the season comes to an end.

“It’s hard to do in small towns where everyone is telling you how good you’re doing,” he said. “The kids deserve that, but they have to keep it outside of them and not let it fester inside of them.”

Nederland and Vidor (3-4, 0-4 in 12-5A-II) bring in the district’s top-two defenses, respectively. The Bulldogs have the last-ranked overall offense, but have the third-best rushing offense behind Crosby and Vidor, who lead the district
averaging 374.14 rushing yards per game.

“They could easily be 4-0 (in district),” Barrow said. “Just looking at what you see on video, we know what they are about. They play hard every play. They have tough kids that run an offense that you must stay disciplined with. Your eyes are so important. You can get caught chasing ghosts and they are running for a touchdown.”

The Pirates won their first three games of the season before dropping four straight to district opponents.

Vidor’s second-ranked defense might be a bit of smoke and mirror because of the amount of time they control the ball by running. Since they began district play, the Pirates have allowed 39.25 points per game.

Barrow said Vidor’s old school Wing T formation is more difficult to prepare for because of how rare it is to see in today’s football.

“It’ll be a challenge for us,” Barrow said. “You just have to trust your players that they are really buying into what you’re preaching to them in practice. The players have to trust that what we are saying is going to be used in the game. You can’t simulate what they do.

“They work on that day in and day out. They perfect it. We can’t do that with three days with our scout team. We see the scheme, but we hope it doesn’t take too long to adjust to game speed.”

Barrow said at this point of the season, he is telling his players the same thing he told them in training camp.

“Teams that continue to play past the regular season are teams that improve every week,” he said. “We have a motto in the locker room that says ‘You never stay the same each week. You either get better or you get worse.’”

Last year’s matchup between the two teams came down to the wire with the Bulldogs pulling out a 28-21 victory.

Kickoff is set for 7:30 at Pirate Stadium on Friday.

Lamar State College Port Arthur may not have an issue with depth on its men’s basketball team this season. And... read more