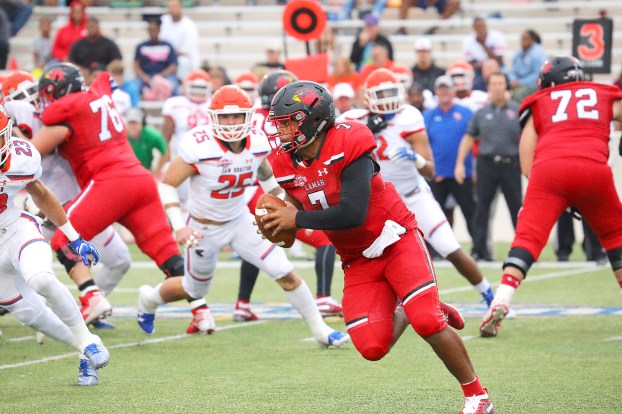 Lamar quarterback Darrel Colbert looks downfield during a 41-23 win over Sam Houston State on Saturday. (Jeff Kellum/Special to The News)

BEAUMONT — Mike Schultz might hear the question for as long as Lamar keeps winning.

For the first time in two seasons, the Cardinals have a started a winning streak, a much-needed event for a team that was recently mired in a four-game losing slide.

Still, in Schultz’s mind, no one game changes the program or is a “signature” victory. The second-year head coach testified that again Monday while breaking down how Lamar (3-4, 2-3) can actually change its course.

“The only way to answer that is to see what we do from here,” he said. “If we don’t win another game, then it obviously isn’t a program-changer and it’s not a signature win. I think we have to put ourselves in position to keep going forward and keep improving. I think what this win does do is, it tells us how far we’ve come as a football team.”

The Cardinals have one home game remaining, Nov. 10 against Houston Baptist. The newfound momentum that began at Provost Umphrey Stadium has a chance to continue in Nacogdoches when they take on Stephen F. Austin (2-5, 2-4) this Saturday.

But Lamar hasn’t won on the road yet this season. Preparing in hopes of a win won’t change because of that.

“Here’s what we’re going to do,” Schultz said. “We’re going to work out Sunday. We going to take Monday off. We use it as a lab day and make sure our kids are doing that and take care of their academics and get their labs in the afternoon, then they’re going to start study hall. We’ll come back and we’ll work hard Tuesday. We’ll work hard Wednesday. We’ll back off on Thursday. We’ll do very little on Friday and get on a bus and head to Stephen F. Austin.”

WILL COLBERT BE READY?

Lamar quarterback Darrel Colbert Jr. sustained an ankle sprain at the end of an 8-yard touchdown early in the third quarter and did not return. Colbert wore a protective boot after the game, and Schultz was not certain whether Colbert would be available at SFA.

“I do not know where we are with Darrel Colbert,” Schultz said. “Ankle sprains are a trick deal. I’ve seen kids come back. I remember I was at the University of Illinois and Juice Williams had a high ankle sprain. I thought he was done for the year, and two weeks later he came back and played against Cincinnati for us.”

SPECIAL TEAMER OF THE WEEK

Slaydon, of Bryan, averaged 44.7 yards per punt with a long of 55 yards. Two of them landed inside the 20 with one touchback.

Eli Peveto of Little Cypress-Mauriceville finished nearly 40 seconds ahead of the rest of the field Monday in winning the... read more