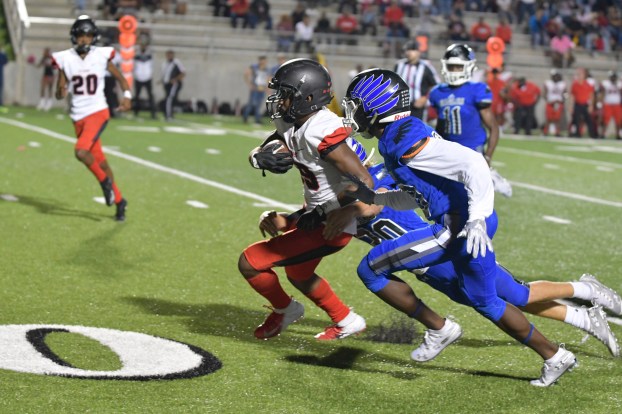 Tavian Gipson of Memorial breaks through two New Caney defenders for a first down last Friday in New Caney. (Jereem Augustine/Special to The News)

FOOTBALL: Titans to punish ‘a few’ players during homecoming game 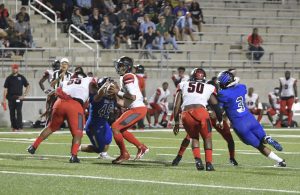 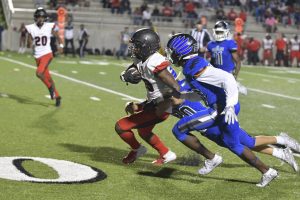 Tavian Gipson of Memorial breaks through two New Caney defenders for a first down last Friday in New Caney. (Jereem Augustine/Special to The News)

Memorial head coach Brian Morgan said “a few” players will serve punishments during the Titans’ homecoming game against the Porter Spartans on Friday.

Morgan would not elaborate on the punishments or the number of players for competitive reasons.

The punishments come after Memorial (5-1, 2-1 in 9-5A-I) earned 225 yards in penalties, including 13 personal foul penalties in a 38-21 loss to the New Caney Eagles on Friday. Cornerback JaVontae’ Hopkins was ejected during the fourth and will have to miss the first half of the game against Porter (5-1, 2-1), per UIL rules.

“Some of those guys have punishments on Friday night that they have to deal with,” he said. “That’s how we’re going to do things. They did some things that are unacceptable in the program. There are consequences for those things. They know that. I think everyone is apologetic and they let their emotions get the best of them.”

“Every teacher in the building, other students — I think everyone saw what happened, and they’ve been told plenty of times,” he said. “They know they screwed up.”

Morgan said that he believes the penalties cost the Titans their perfect record.

“I think (the penalties) were due to a high emotional level,” Morgan said. “It was a big game and our guys were geared up for it. We just didn’t respond to things that happened in the game. We didn’t respond well. I don’t think it was out of malice. We just let our emotions get the best of them.

“There were 225 yards of penalties and it was a three-point game in the fourth quarter. Those of us in this building know what the outcome should’ve been, but we let that one slip out of our hands.”

Morgan said he believes his team will be able to keep cool emotions in front of the homecoming crowd.

Friday’s matchup features the district’s best passing offense (Porter) against the district’s best defense in Memorial. The Titans rank third in pass defense in the district and will have their work cut out for them as the Spartans have 1,777 yards through the air this season, which is more than 700 better than Kingwood Park, ranked second in the category.

“They throw the ball well,” Morgan said. “They have a solid quarterback, a couple of good receivers and a good punt returner. They play well on defense and are very sound on defense. I have no doubt that they are going to be ready to play.”

The Titans’ fourth-ranked rushing might be able to find success on the ground against a Porter defense that ranks third to last against the run.

“Porter knows it’s our homecoming,” Morgan said. “They would like to surprise us. Our kids are focused in and had a really good week of practice. Our guys are ready to go.

“It’s not something that is taken lightly in Port Arthur,” he said. “If you don’t know the expectations in Port Arthur, being 5-1 isn’t really acceptable at this point. It’s a good thing.”

Kickoff is scheduled for 7 p.m. at Memorial Stadium on Friday.

NEDERLAND — Brotherhood within the program has often been cited as a reason for Nederland’s 6-0 start. Every time Bryce... read more