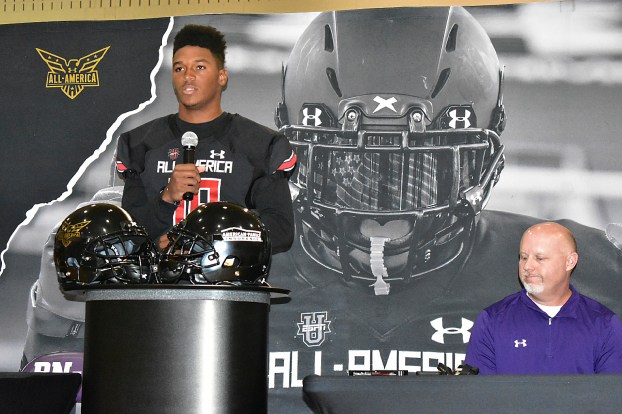 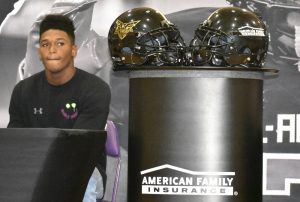 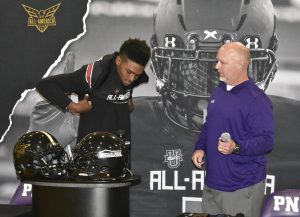 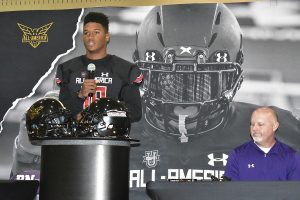 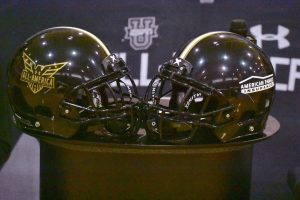 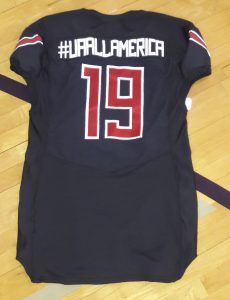 Back of Roschon Johnson’s jersey for the Jan. 3 Under Armour All-America game. (I.C. Murrell/The News) 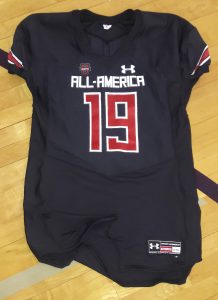 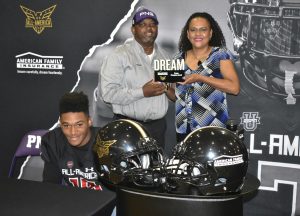 PORT NECHES — Brandon Faircloth has coached U.S. national football teams. He’s been around some of the nation’s best high school quarterbacks. He coached on the staff of the same team Matthew Stafford led to a state championship.

“I will be biased, but he is definitely the best quarterback I ever coached,” the 10th-year Indians head coach said. “I’ve never seen anyone go attack their goals and dreams like he has.”

Johnson said it’s hard for him to fathom being an All-American, although he found out during a Future 50 camp last year ESPN Recruiting picked him and others for the game.

“It’s really surreal to be considered to be an All-American,” Johnson said. “It’s a blessing just to be here.”

Johnson is the second Under Armour All-American from Jefferson County in three years. Memorial alumnus Kary Vincent Jr. played in the 2017 game and is now a sophomore cornerback at LSU.

The assembly was one of 80 stops on a tour that American Family Insurance, a presenting sponsor of the game, has organized to present each selectee a game jersey.

“It’s a great day of hard work paying off and dreams coming true,” Faircloth said. “I’m very happy for him and his family.”

The honor is fitting for the two-time District 22-5A and The News Super Team MVP, who has been committed to the University of Texas since the summer of 2017. Johnson also took part in prestigious football camps including the Future 50, Nike’s The Opening and Elite 11 Finals.

“The camps have really provided me with an experience that some people don’t get,” Johnson said. “It’s really opened my eyes toward the competition that’s out there.”

His passing accuracy this season — 72 of 90 (80 percent) for 881 yards and seven touchdowns with three interceptions — and his 539 rushing yards for 11 more touchdowns also befit All-America status, but it’s his ability to be involved in almost every touchdown that may be turning more heads this season.

Johnson ran for four of five PNG touchdowns, including a go-ahead 3-yard tote with 1:28 left, in a 38-32 win against Vidor on Oct. 5. Johnson passed for the other TD, ran three times for a two-point conversion and threw another to Peyton Proenza.

On Oct. 12 at Crosby, Johnson had a hand in all but five of the Indians’ six offensive touchdowns, including a pass to Proenza from 13 yards out with 3 seconds remaining followed by another rushing conversion in a 48-45 win.

“I feel honored, actually,” Proenza said. “Catching touchdowns from him is just an honor. He’s going to be playing at the University of Texas.”

Johnson’s play has left Faircloth feeling blessed to coach him.

“Roschon’s blessed,” Faircloth said. “He has great teammates, and he’ll be the first to tell you, it’s not just him.”