‘No Manches’ to clean up sea wall 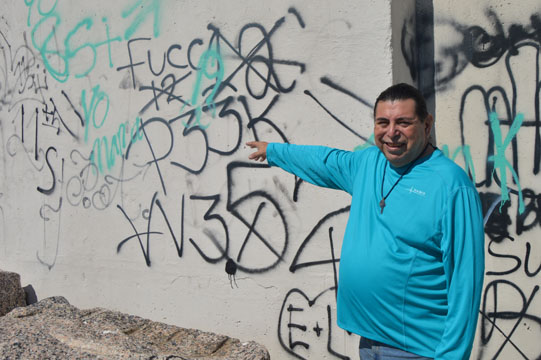 Fernando Ramirez walks by sections of the Port Arthur seawall that have been scored with several graffiti marks Friday morning. “No Manches” is an anti-graffiti campaign that starts Sunday to clean up sections of Port Arthur. (Lorenzo Salinas/The News)

The sight on the seawall may soon be looking a little cleaner thanks to an initiative from the Hispanic community in Port Arthur.

Fernando Ramirez has organized an anti-graffiti campaign starting Sunday called “No Manches” to clean the graffiti off the seawall. Ramirez said the name is Mexican slang for “Don’t mess with me.”

It is also the name of a song by Port Arthur band Kumbion Zelekta, who will be at the event to make a music video featuring the clean up and some of its volunteers.

Ramirez said the song inspired him to organize the clean up.

“The song and the words, they wrote it because they were tired of the news saying Hispanics were all ganging and banging and spraying graffiti everywhere,” Ramirez said. “They wrote this song as an anti-graffiti and anti-gang song.”

Ramirez contacted the band after hearing the song and asked if they’d be interested in participating.

“I wanted to do something positive,” Ramirez said. “I asked them if they would mind my taking this to the city and the police to do an anti-graffiti and anti-drug campaign. I pitched it to (city manager) Harvey Robinson and the police chief and they loved it.”

The event is being funded by local businesses and volunteers, something Ramirez said he was proud of.

“The city told me they have no money to do it, and I told them I was just there to ask for permission,” he said. “The Hispanic community wants to do this and we’ll fund it ourselves.”

During the event, Ramirez said organizers would stage a scene with kids, the police chief and a Hispanic matriarch.

“We’re going to have the police chief holding a pair of handcuffs in one hand and a bucket of cleaning solution in the other,” Ramirez said. “He’ll be next to a Hispanic mom holding a chancla. They’ll look from the mom to the policeman and be afraid of the woman holding the chancla.”

A chancla is typically used as a household tool of discipline in Hispanic communities.

“They’ll choose the bucket with the cleaning solution,” Ramirez said. “It’s just a bit of humor to bring the cultures together. It’s something I know the Hispanic community can identify with.”

“We have people coming together to do the video. This is just the start; this (video) is what we’re going to use to promote the clean up. It’s open not only to the Hispanic community, but to everyone.”

Part of, not apart

“We need the Hispanic community to be a part of this city and not apart from it,” Ramirez said. “A lot of them feel disenfranchised, so we need to give them a sense of pride in their city.”

Ramirez emphasized the ongoing nature of the campaign, iterating that the clean up would not only be a one-off ordeal.

“This is just phase 1. Phase 2 is coming,” he said. “I’ve had people ask me why I don’t have start and end dates with this — and I’ve said it’s because this isn’t a one-time thing; it’s an ongoing project.”

Ramirez said the reason the group is starting with the seawall is because it’s public property. It’s not something they would need to get a homeowner’s permission to clean, for instance.

“It’s something people see walking on the seawall every day,” he said. “I asked a lot of people if they wanted it cleaned up and they said yes. We needed to do something about it.

“We want to give a message to parents to take more responsibilities for kids, to make Port Arthur a cleaner place. Hopefully, it will lead to other things.”

“No Manches” starts at 1 p.m. Sunday at the seawall. Volunteers from the community, Kumbion Zelekta and the Port Arthur Police Department will be present.