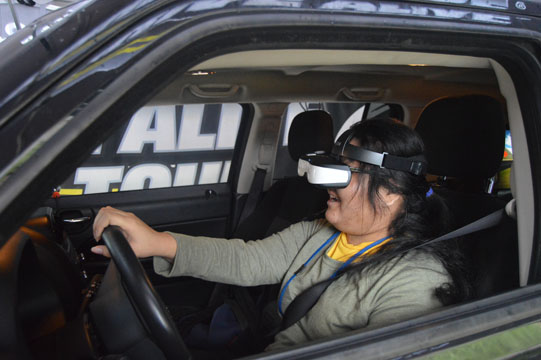 It is well known that driving drunk is dangerous; however, driving distracted is just as dangerous, if not more so.

Students sat in the driver’s seat of the company’s heavily decaled SUV and put on a virtual reality headpiece that simulated the difficulty of driving while impaired or texting.

“My job is to run the simulator,” Mike Grodi said.

Grodi was one of two Arrive Alive representatives and technicians running the simulation software and giving students the results of their — usually — disastrous turn behind the virtual wheel.

Grodi comes from Grand Rapids, Michigan. He and his wife, Tori, have traveled through 14 states in three weeks running the tour and reaching hundreds of kids, students and professionals during their time on the road. 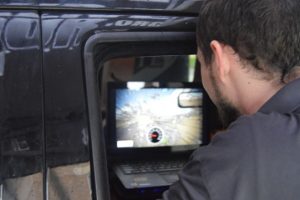 The Arrive Alive Tour makes visits to high schools, colleges and corporations. Grodi estimated he and Tori have reached 2,500 individuals through their virtual reality-driving simulator.

Distractions such as texting, drinking and smoking were offered for would-be drivers through the simulator. Grodi would monitor their progress on a laptop computer.

“Kids realize a lot of the dangers of driving impaired through this,” Grodi said. “They could be the best drivers in the world, but all it takes is alcohol in the system to impair their ability.”

Grodi said the perils of driving impaired could lead to accidents, injury, death or worse.

Moreover, driving while distracted but sober could also lead to dangerous consequences — even worse than that of driving drunk.

“Driving while texting is four times more likely to result in an accident than driving drunk,” Grodi said. “The reason is probably because everyone has a phone.”

Grodi said that in an average span of 4 1/2 seconds that it would take someone to text on their phone or check GPS while driving at 55 mph, they would have traveled the length of an entire football field.

“The car kept moving. It started out at as natural driving, but then it became drunk driving,” Peggy Bryan, sophomore, said.

Bryan said though she has never driven drunk before, she believed it was an accurate portrayal of driving while under the influence.

UNITE’s Arrive Alive Tour is a nationwide initiative. For more information or to schedule a tour for one’s organization, call 888-436-3394.