Marcelo “Mo” Molfino has been honored as the 2018-2019 Aurora Golden Triangle Sertoma Club Service to Mankind Award recipient at the Sertoma banquet.

The award is given to people who have been recognized as embodiments of the organization’s acronym: SERvice TO MANkind. Sertoma members agreed that Molfino deserved the award, one which is the highest honor given to an individual who is not a member of the nonprofit organization.

“He has been so outstanding to the community, reaching out to children and different people. He goes well above and beyond his job,” Louise Colletti said. “Everything he does, it’s on the side and done on his own time.”

Collettie is the 2018-2019 president of the Aurora-Golden Triangle Sertoma Club.

Collettie said Molfino regularly hosts events in which he pays out of his own pocket.

“The award is honoring someone who is making a difference in our community. He has done so many things for our community, it’s hard to list them all,” Jodie Wood said.

Wood is the 2018-2019 Sertoma chairman. She highlighted his volunteer work with local youth as one of the many reasons for him receving the award.

“Most of the things he does are related to kids. He has been a Boy Scout leader, a soccer coach and he’s been on many nonprofit organization boards,” Wood said.

“He is the most generous individual that I’ve come across. He’s a very genuine person.”

Wood said when Sertoma first reached out to Molfino to invite him to a banquet in his honor, Molfino asked that the Sept. 19 banquet be made into a fundraiser to support one of the organization’s projects instead of a celebration for him.

“He is just a wonderful human being. He’s so deserving of this award,” Collettie said. 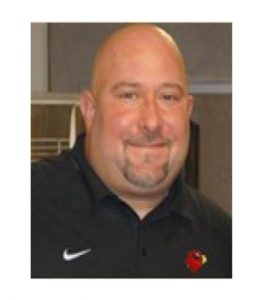 Molfino currently serves as the assistant chief of criminal investigators for the Jefferson County District Attorney.

He has a long history of serving in law enforcement, including work with the Jefferson County Sheriff’s Department and a 13-year tenure with the Port Arthur Police Department.

He is also vice president of Cell Forensics, a cellular and computer forensic services.

He also served as Cub Master for Cub Scouts Pack 65 in Beaumont for more than four years.

Wood said his most recent endeavor has been creating the “Being a Leader” program, a joint initiative with Bob Hope School. It’s a mentoring program for young adults.

“His presentations and his passion… make young people see that boundaries are set on people only if we allow them,” Wood said. “Mo’s motto is ‘with hard work, discipline and drive, anything is possible if we just work for it every day until our goal is achieved.’”