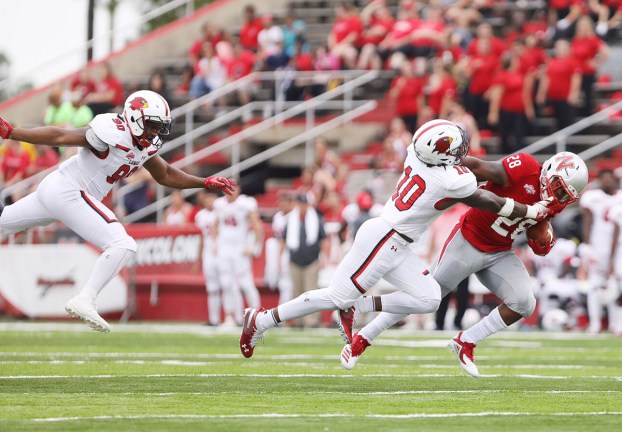 FOOTBALL: Colonels hang up 613 yards, pull away from Cardinals for 50-27 win 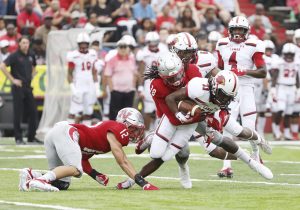 Lamar receiver Zae Giles is tackled at the end of a reception by Kevin Johnson of Nicholls State on Saturday in Thibodaux, Louisiana. (Misty Leigh McElroy/Nicholls media relations) 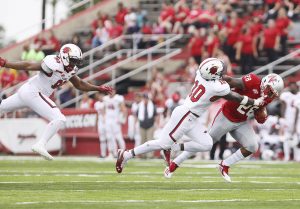 THIBODAUX, La. — Lamar has fallen behind first in four of five games this season.

The Cardinals came back, however, to lead 15th-ranked Nicholls State on two occasions in seeking its first win over a ranked team since upsetting No. 3 Sam Houston State in 2015.

“I think people see that, and eventually if they stay the course and stay strong, we’re going to turn it [around].”

Just as Nicholls (3-2, 2-1 Southland) has after a 23-game losing streak that ended three years ago. The 50 points are the Colonels’ most under fourth-year head coach Tim Rebowe and most since 2012, and they came on 613 total offensive yards. Lamar totaled 371 yards.

Lamar (1-4, 0-3 Southland) has not won since beating Kentucky Christian 70-7 in the season opener, but the Cardinals came close in previous games in Beaumont against Northwestern State and Southeastern Louisiana. A program that hasn’t had a winning season since 2014 is still looking for a statement victory and a spark to its own turnaround.

“Just staying strong,” said free safety Davon Jernigan, who had two interceptions for Lamar. “Just stay strong and trust the process that coach Schultz has implemented to us.”

Darrel Colbert rushed 19 times for 60 yards and a touchdown and finished 10 of 20 passing for 159 yards and another score. He also threw two costly interceptions.

The first one, on Lamar’s first possession, ricocheted off intended receiver Dorian Gaston and his defender, arching into the hands of secondary defender Austin Dickerson. He took it back 26 yards for the opening touchdown.

A.J. Walker, a fullback starting again as a tailback for the injured Myles Wanza, covered 34 yards on a reception, and receiver DeWan Thompson Jr. carried 22 yards on a run-pass option carry into Nicholls territory, but an offensive pass interference call eventually led to the Cardinals setting for a 47-yard Elvin Martinez field goal.

Martinez went 2 for 2, also converting a 48-yarder on the opening drive of the second half that got Lamar within 27-20.

Giles, who had two catches for 43 yards, went for 38 on a screen pass from Colbert, who followed an 8-yard pass to Jawun Ruffin with a 1-yard sneak into the end zone to put Lamar ahead for the first time at 10-7.

Fourcade helped Nicholls strike back with a 65-yard strike to Stefano Guarisco (three catches, 110 yards) that set up the quarterback’s 4-yard carry for a score.

Mason Sikes was all alone on a 44-yard TD catch from Colbert to give the Cards their second lead. But Gums (10 carries, 152 yards) had barreling runs of 14 and 26 yards on Nicholls’ next series that took away Lamar’s sails, and Dai’Jean Dixon bookended the go-ahead drive with receptions of 24 and 10 yards.

Gums made maybe the highlight of the game when he spun out of a pile and sprinted 68 yards to pad the Nicholls lead to 27-17. Lamar sought to narrow the gap before halftime, but cornerback Darren Evans picked off Colbert.

“We’re just a couple of plays away as an offense,” Colbert said. “We’re digging ourselves holes. We wanted to start off fast today … especially on the first drive, but we just got to stop beating ourselves. That’s something we need to work on this off-week.”

DEFENSIVE HIGHLIGHTS
Jernigan returned his picks for a total of 19 yards, one week after going 53 yards for a pick-six against Southeastern Louisiana.

“Coach told me all week they were going to throw RPOs (run-pass options) to my side,” he said. “I glanced to my side. Really, I just had patience and intercepted the ball.”

TARGETING CALL
Guarisco pulled down a 26-yard catch that ended with a targeting call against Tariq Gordon with 12:36 left before halftime. The penalty automatically ejected Gordon for the rest of the game.

Fourcade also broke runs of 30 and 12 yards, the latter giving him his second touchdown run, and Fonseca connected on a 25-yard field goal.

But Lamar backup quarterback Jordan Hoy cut into the deficit on an 8-yard touchdown run.

FORMALITY? PLEASE
The game was called with 2:04 left when officials declared a lightning delay. Nicholls was already ahead by 23 points.

THE GAME BALL GOES TO …
Jernigan for his two interceptions and Martinez for going 2 for 2 in field goals of almost 50 yards each.

FOOTBALL: Worth the time: Titans run home win streak to 11

Memorial and Galena Park took 1 hour, 35 minutes to complete the first half of their District 9-5A Division I... read more