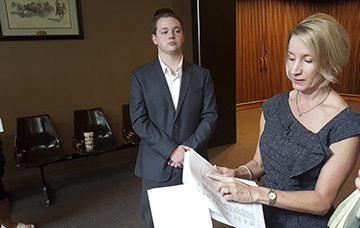 FILE PHOTO — Cross Coburn, left, watches as his attorney Jill Pierce speaks with media regarding the validity of signatures on a recall petition on Sept. 28. Mary Meaux/The News

BEAUMONT — An election dispute between Groves City Councilman Cross Coburn and the city of Groves has reached the 172nd District Court and Judge Donald Floyd.

Coburn, who is the subject of an upcoming recall election, and his attorney Jill Pierce were in court Friday. Frank Calvert is representing the city.

Pierce noted a number of issues with the certified recall petition. They include two people have come forward with signed affidavits saying they did not sign the petition although their names and information were on page 183 or 200. The duly sworn person handling that specific page of the petition was Darla Bailey, wife of Groves Mayor Brad Bailey.

There was also a page of the petition with Darla Bailey’s printed name meaning she circulated the petition but instead of her signature there was the signature of David Greig. The issue was later corrected with someone scratching Bailey’s name out and putting Greig’s name in its place. A notary seal was affixed to the document.

In another instance, someone had penned in the name “Chris Coburn” as the topic of the recall. A corrected version shows the same page but the name “Chris” was named to look like the word “Cross.” A notary seal was affixed to the document.

After the hearing Coburn addressed the few reporters present, saying the fact that the mayor’s wife as well as the wife of Councilman Sidney Badon and Councilman Kyle Hollier all took part in circulating the recall petition showed the city has something to do with the issue.

The issue has also led him to look at what he wants to be known for in his political career — he wants to be someone the public can trust and be their leader.

Floyd said the court will receive the case and have a decision Monday.

Coburn has been in the public eye since March after local media and the city of Groves each received an anonymous folder in the mail with risqué photos of him. The photos were taken from Grindr, a dating app.

Coburn believes he is the victim of a political smear campaign.

By Lorenzo Salinas l.v.salinas@panews.com   Love and family are the hallmarks for the latest member of Mexican pageant royalty. Angelica... read more