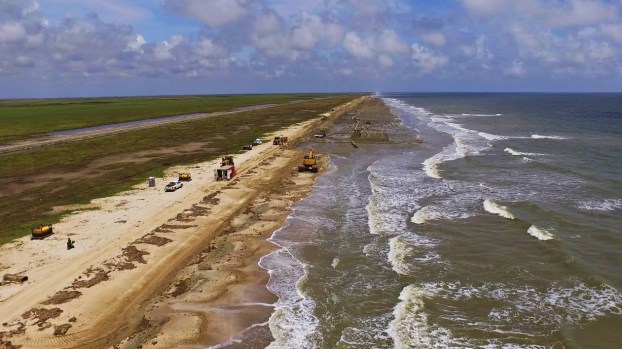 A portion of McFaddin Beach was rebuilt with $9.5 million. (Special to The News)

My grandfather showed me the wonders of our coastal marshes as soon as I could wear a life jacket and climb into his aluminum boat.  The marsh and our Gulf beaches have been my getaway and playground at every stage of life. Nature’s bounty, sunrises in duck blinds, crabbing, family picnics, sunsets and Gulf beach breezes all shaped who I am.

Later, I’d learn how crucial marshes are to shielding our homes, industries, businesses, ports and national defense assets from hurricanes. I’m convinced our marshes saved
Jefferson County from catastrophe during Hurricane Ike by reducing storm surge velocity enough to prevent overtopping the Port Arthur Levee.  We had less than a foot to spare from many billions of dollars in losses and a different future.

After the Deepwater Horizon fines were set, I joined with the County Commissioners to ensure our area got its fair share of Texas’ $1.2 billion oil spill payout.  We agreed to focus on protecting our coastal marshes from saltwater intrusion and rebuild our beach front for public use and as a barrier to hurricane storm surge.  This “green infrastructure” approach to Deepwater Horizon funds met state and federal approval and is paying a double dividend for high quality outdoor recreation and economic well-being.

Following a decade’s study by state and federal natural resource agencies, Jefferson County Engineering Department, the county’s Drainage District No. 6 and Ducks Unlimited, the Salt Bayou Watershed Restoration Plan was adopted in 2010.  That was the same year as the Deepwater Horizon tragedy.  Our preparation met opportunity when BP funds began coming to coastal Texas.

The Salt Bayou Plan is named for the central watershed in the 139,000-acre coastal marsh bounded by the Gulf of Mexico, the Gulf Intracoastal Waterway and the Sabine Neches waterway in the east and almost to High Island to the west. The biological health of this area became hydrologically challenged when the GIWW was built, the Keith Lake fish pass was dug, and hurricanes, especially Ike, eroded the McFaddin beach.

Phase 1 of the Salt Bayou Plan was done by 2015.  An underwater baffle was installed in the Keith Lake outlet restricting saltwater from the Sabine Neches waterway entering the marsh while allowing recreational boat access. The General Land Office contributed $1 million in coastal erosion funds, Texas Parks & Wildlife Foundation invested $1.25 million and Jefferson County used mitigation funds from SEMPRA and Golden Pass for another $625,000.

Completion of the Ed Holder’s “Great Outdoors” Boat Ramp next to the Keith Lake outlet in 2016 was a Phase 1 add-on, with $2.3 million in county and Texas Parks and Wildlife Foundation funds. This modern boat ramp is one of the best in Texas, has six trailer launches and ample parking. Kayaks and inflatables have an easy to use pier for put-ins.

Phase 2 is a new 17.9-mile long, 6-foot high clay berm set back 200 yards from our Gulf coast for $9.5 million. The new berm adds to an earlier 3.4-mile berm built by Ducks Unlimited in 2013 using $500,000 from the National Oceanic Atmospheric Administration. Both berms keep saltwater from lesser storms and surge tides out of the marsh.

The Texas General Land Office constructed the berm with $4.6 million in state coastal funds and over $3 million from the U.S. Fish and Wildlife Service.  Jefferson County added $2.8 million from the federal Coastal Impact Assistance Program plus $100,000 in county dollars.

Phase 3 began last year to rebuild the county’s 20 miles of Gulf beach and sand dunes.  This costliest Salt Bayou phase has an over $65 million price tag but Deepwater Horizon and Hurricane Harvey funding is in place.  A prototype 3-mile long section of McFaddin Beach was done in 2017 for $9.5 million.

Next year, millions more cubic yards of sand will be dredged from offshore and placed on the remaining 17 miles of beach and dunes. The new dunes will be grass planted to enhance durability and provide critical nesting habitat for least terns and other threatened or endangered shorebirds.  Turtle nesting habitat will be restored in Jefferson County! This phase may be the most popular with the public, especially families, beachgoers, birders and saltwater anglers.

Phase 4 involves installing two freshwater siphons under the GIWW.  The siphons will restore the natural freshwater sheet flow from north of the GIWW to the Salt Bayou marshes on the Gulf side. So far, $7 million is in place from Deepwater Horizon, Texas Parks and Wildlife Foundation, Jefferson County and two North American Waterfowl Conservation Act grants that Ducks Unlimited won for the project.

Finally, Ducks Unlimited has partnered with the U.S. Fish and Wildlife Service and the county to build breakwaters along the GIWW to halt bank erosion occurring from the wakes of passing barge traffic along the nation’s most valuable inland waterway.

This six-phase program will keep Texas’ largest coastal marsh alive and well and is a meaningful way to restore many Deepwater Horizon oil spill injured fish and wildlife habitat.  World-class public recreation gets a win along with storm surge protection for Jefferson County livelihoods and homes.  This funding package is already over $95 million and will go higher.

The Jefferson County Commissioners Court is grateful to all partners, including Gov. Greg Abbott, Texas General Land Office, Texas Parks and Wildlife Department, Texas Commission on Environmental Quality, the National Fish and Wildlife Foundation, U.S. Fish and Wildlife Service, National Oceanic and Atmospheric Administration and the Texas congressional delegation who have all worked steadfastly for a coastal Texas legacy win.

The Port Arthur Police Association has a brand new contract in place that includes a wage increase and clarification of... read more