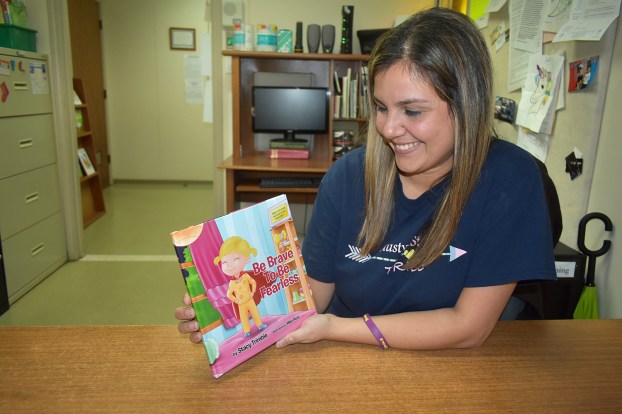 Stacy Trimble holds a copy of her book “Be Brave to be Fearless” which is about Austyn Halter, who passed away last year from a rare form of leukemia. Mary Meaux/The News

Austyn lives on in children’s book

GROVES — The story of Austyn Halter is one of love, strength and determination all rolled up into a princess warrior.

The blonde-haired child with the near ever-present smile passed away at age 4 last August after a two-year battle with a rare form of leukemia. But her story and likeness grace the book “Be Brave to be Fearless,” written by family friend Stacy Trimble.

“She always had a happy spirit and kept proving she could do it,” Trimble said from inside St. Paul Lutheran Church’s day-care center, where Austyn once attended. “She did everything with such determination and courage. We’d go visit her in the hospital and she would talk to everybody with her little Minnie Mouse dress on, go room to room. She didn’t let anything hold her down.” 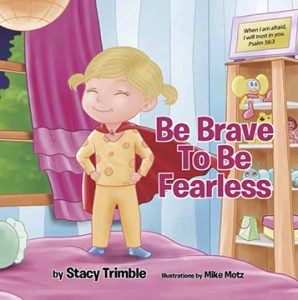 Trimble, who has two children of her own, began writing the book while Austyn was ill. Then the child died and a “flood of emotions came over me.”

“I would think ‘why?’ then think of how strong she was. That was her purpose. You can fight it,” she said. “She touched so many lives.”

So she finished the self-published book with plans to donate funds from the sale of the book to families who have a child with cancer but she hasn’t ironed out all of the details yet.

Trimble opted not to write about cancer since it’s a children’s book but mention that Austyn became sick and was brave and strong. 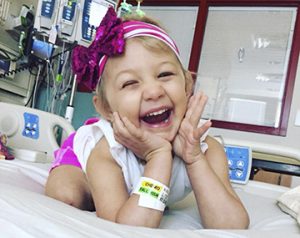 “I talked about what Austyn faced with an illness and how deep inside she has strength and determination,” she said. “And even through the struggle, she had faith. The book will encourage other kids and let them know they are strong and can fight too.”

On the anniversary of Austyn’s passing, Trimble sent the child’s mother, Sarah Halter, a picture of the book cover.

“I knew she would be struggling and that day would be hard. I sent her the picture of the cover and said ‘ the girl on the front is your little girl,” she said.

The next day Trimble brought the book to the cemetery and gave it to Austyn’s parents, Sarah and Josh.

“The story is beautiful, our baby is beautiful,” Sarah Halter said, adding she was completely taken aback when she saw the book. “This is a perfect picture of who Austyn was and no matter what, each turn of the page, she’s smiling. That’s who she was.”

The book, she said, is a perfect representation of Austyn and the illustrations are from actual photos right down to one from Austyn’s fourth birthday party.

“My biggest fear, I don’t want her to be forgotten,” she said. “I am Austyn’s voice now.”

She’s also hoping the book will also bring awareness to the issue of pediatric cancer research, which only receives about 4 percent of federal government cancer research funding.

People across the area and beyond became captivated with the little girl and followed her journey on social media through #AustynStrong.

Professional golfer Andrew Landry, originally of Groves, donated his first endorsement check of $10,000 from Moonshine Sweet Tea to Austyn shortly after his performance at the 2016 U.S. Open, where he led after one round and remained in position to win going into the final round, according to a Port Arthur News archive story.

He said the news of Austyn’s death was “super devastating.”

“My heart goes out to her family and friends who’d been a part of her life,” Landry said. “… It’s just devastating. On the other hand, the way I’m looking at it, it was a true angel who was sent down. She touched my life.

“I never even met the girl. Just following her story and talking to her mom and dad and hearing how passionate and strong she was, it’s crazy to me to think a girl that incredible could go through something like that.

“She brought myself closer to God. I found prayer in it praying for her,” he said. “She changed my life. She was an angel sent here four years ago.”

Halter said Austyn would be proud of the book. 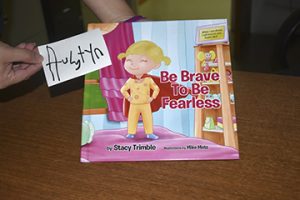 Stacy Trimble shows a sample of Austyn’s own handwriting of her name that will be used in an upcoming book signing.
Mary Meaux/The News

A “Be Brave to be Fearless” event will be held from 2 to 5 p.m. Sunday, Oct. 14 at St. Paul’s in Groves where people can pick up their copy of the book or purchase a book. There will be storytelling, activities and games and a book signing.

One of the illustrations shows Austyn wearing a shirt that says “I am the hero of my own story” — this epitomizes the book and Austyn.
“Right before Austyn passed she wrote her name,” Trimble said while holding a laminated piece of paper with Austyn’s handwriting. “I will get it on a stamp. I wrote the book but she’s the true author of the book.”

Persons wishing to order the book can do so at www.stacytrimble.com

The Rainbow Bridge, once the tallest in the South, is celebrating its 80th birthday Saturday. The bridge was an 11-year... read more