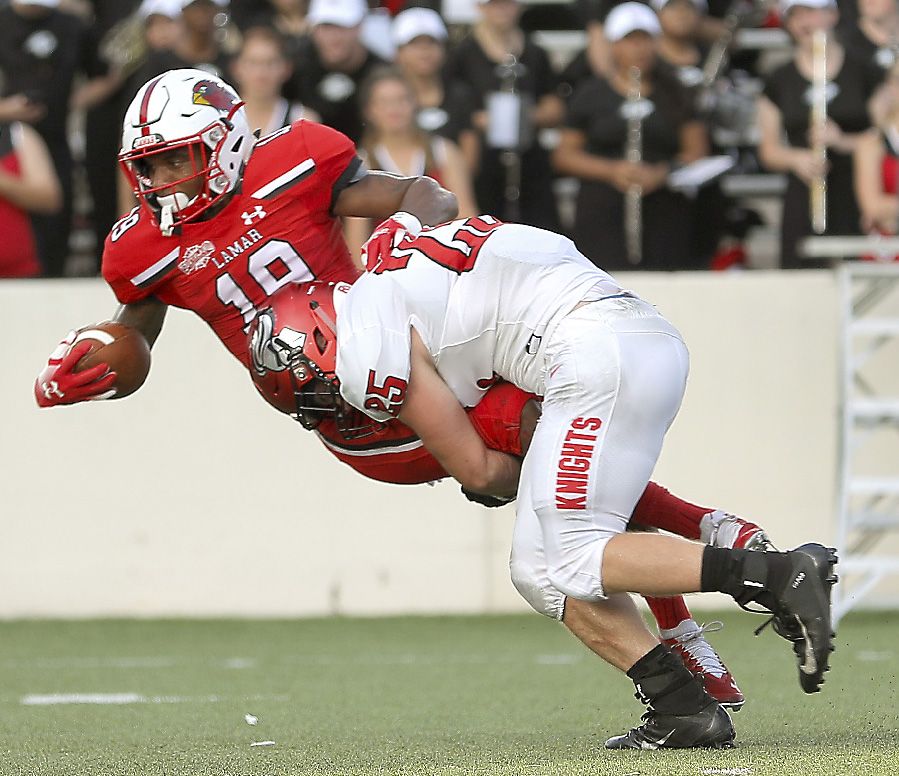 Lamar’s receiving corps, including Dorian Gaston (19), has been thinned due to several injuries at that position. Gaston backs up Isaiah Howard, not pictured, as a right-side wideout. (Jeff Kellum/Special to The News)

BEAUMONT — Lamar has lost three football players due to season-ending injuries and hope to have four more fully healed in time for Saturday’s visit to Texas Tech.

Schultz did not describe the nature of either injury because of Lamar’s athletic policy against disclosing such. King, a former Hamshire-Fannett quarterback, was helped off after making a 5-yard catch in the first quarter and did not put any pressure on his left foot.

King’s loss is big for an offense that has seen him develop as a playmaker on inside routes and as a running back the past two seasons. King was Lamar’s leading rusher with 354 yards and three touchdowns on 102 carries in 2017, but Schultz had moved him to an inside receiver full-time as Lamar (1-0) increased its depth in the backfield.

“The great thing about Kendrick, we’ve got people behind him,” Schultz said. “We’ll move D.J. [DeWan Thompson Jr.] and Kirkland Banks back in [the lineup]. There wasn’t really one starter. We felt both of those guys could go in get what we want done at the A-position (slot receiver). As far as talent and being able to do those type of things we want them to do with the offense with that position, I don’t think that’ll hurt us.”

Brooks, of Frisco, played in his first collegiate game.

Norman intercepted a pass with about 10 minutes left in the second quarter, one of three the Cardinals came up with.

The Red Raiders (0-1) likely will have a chip on their shoulder after struggling in Houston against Ole Miss this past Saturday, losing the Big 12-SEC crossover game 47-27.

The loss further puts Red Raiders head coach Kliff Kingsbury on the hot seat. Kingsbury, 39, a record-breaking quarterback for Texas Tech from 1998-2002, is in his sixth season with the Raiders, but owns a 30-34 career record with only two winning seasons and one bowl victory in three tries.

The Raiders struggled mightily to contain Ole Miss’ offense after much talk about their defense having improved from last year’s 5-7 run. They allowed Jordan Ta’amu to throw for 336 yards and two touchdowns and gave up 210 rushing yards, 204 of them to Scottie Phillips, who ran for two touchdowns (including one on a 65-yard rush).

Kingsbury said Sunday that junior starting quarterback McLane Carter will be a game-time decision with a high ankle sprain, according to WreckEmRed.com. Carter completed 4 of 7 passes for 49 yards before his injury allowed Alan Bowman to come in and throw 29 for 49 for 273 yards.

Schultz said the Cardinals’ defense will prepare for what Tech’s offense can do, rather than focus on what each quarterback does best.

“Tech is a system,” Schultz said. “It’s a good system. It looks to me, year after year after year, as they unplug one [quarterback], they just plug another one in. We’re just preparing for what they do. I don’t think they’re going to change that much.”

Kingsbury also may sit All-Big 12 safety and senior Jah’Shawn Johnson for a second game in a row. Johnson has played with a bad shoulder since his freshman season and did not go through any contact drills during preseason camp, according to an article on 247sports.com.

Jones can get loud

Like many Big 12 stadiums, Tech’s Jones AT&T Stadium can all but deafen the snap count of a team that normally plays in much smaller environments. The 61,836-seat stadium almost quadruples the capacity at Lamar’s Provost Umphrey Stadium (16,000).

“It is a tough place to go in and play,” Schultz said. “I’ve been there several times. We’ll talk to our players about what to expect. It is a hostile environment. We’ll try to educate them on what to expect and how to handle it.”

FOOTBALL: Lamar warms up for Texas Tech with rout…