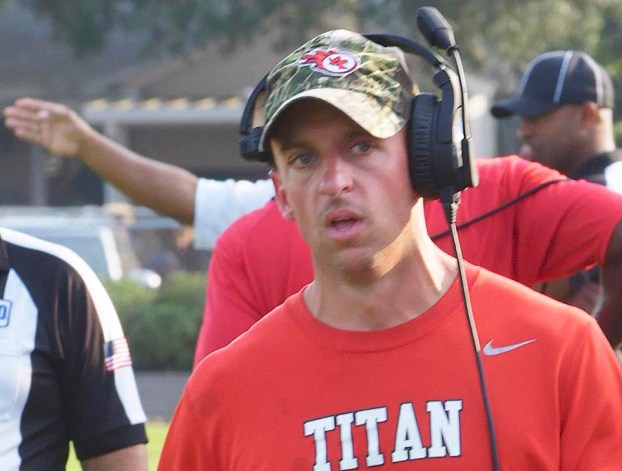 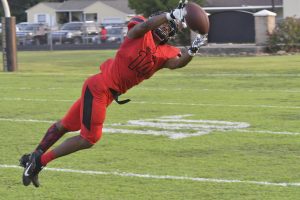 Teajawon Mack of Memorial leaps for a catch against Nederland during last week’s scrimmage. (Jereem Augustine/Special to The News) 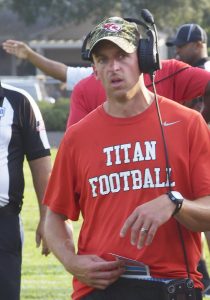 Brian Morgan has signed up for one big birthday party of sorts on Friday, and Port Arthur has been invited.

Footballs will be tossed around because the Memorial Titans are hosting the Deer Park Deer.

Yeah, it’s quite a way for the Thomas Jefferson graduate and former Lamar assistant to begin his head-coaching career.

To commemorate the kickoff to the 2018 season, Morgan asked Titans fans to wear black to the game for a “blackout,” giving Memorial Stadium a college-like atmosphere as former District 21-6A rival Deer Park visit.

Morgan is confident the Titans will start fast, but cautioned one never knows until kickoff.

That’s not to be confused with dealing with proverbial butterflies of a season opener.

“It’s not so much butterflies, just anticipation,” Ladia said. “Just ready to play.”

The 6A Deer and 5A Titans will play for the first time since Sammy Linton ran for 307 yards three years ago in helping the Deer spoil Memorial’s homecoming 45-28. Linton only needed 131 yards to reach 1,000 on the season.

Morgan says the Deer, who went unbeaten in 22-6A last season but lost in the 6A Division I bi-district round to finish 6-4, will bring a different offensive look.

“I think they’re going to try and throw it around more than we’ve seen Deer Park in a number of years,” Morgan said. “At the same time, just watching their scrimmage, you don’t really know. They have a decent-sized o-line, and a decent sized d-line. They’re going to have thick-body, strong kids. That’s what Deer Park has always had.”

The Deer scrimmaged against Humble Summer Creek, now led by Morgan’s predecessor, Kenny Harrison, but Flynn — who was recently an offensive coordinator at NAIA Grand View University in Des Moines, Iowa — said it wasn’t to draw similarity between Harrison’s and Morgan’s teams.

“That was already set up,” Flynn said. “They had been scrimmaging for a number of years. The weird thing is that I was a former college coach. I was a small-college coach. I actually recruited and coached 6-8 guys out of Port Arthur. I knew the town and the talent year in, year out, Port Arthur has.”

Deer Park boasts five returning defensive starters, and Morgan added that their unit reminds him of what he saw in Nederland during last Thursday’s scrimmage.

“The same body types and mentality,” he said. “That’s why I thought it was good to see [Nederland].”

The Titans won their scrimmage 24-7, but Morgan quickly identified what has to work better against Deer Park.

“We’ve got to improve on third down,” he said. “Defensively, I thought we had some missed tackles. That comes from the first time you play somebody. … I think the effort was there. When we didn’t shoot ourselves in the foot with a penalty, we were able to move the ball on offense.”

Ladia said the offense calmed down after Nederland’s defense stuffed the unit on the first three series.

“We knew what we had to do,” Morgan said. “We had to get points on the board. We had to score. Therefore, we calmed down, we played within ourselves and the result came out in a win.”

Morgan has also taken time during preseason camp to get used to in-game communication with his assistants, namely offensive coordinator Zach Bass and Rashard Colquitt.

“For the last couple of weeks, we’ve been using the headsets and kind of simulate that every day in practice,” Morgan said. “I communicate with coach Bass, and he’s in the [press] box, and then coach Colquitt being our signal guy, getting used to talking to each other on the headphones. We actually do that in practice every day. I stand on the other end of the field just to get used to it. We didn’t have any issues.”

The following items are prohibited: Outside food or beverages; alcoholic beverages, illegal drugs, tobacco products or weapons; backpacks, camera bags or bags and purses larger than 8.5 inches-by-11 inches, tents or other large shade devices; noisemakers, horns, bells or whistles; animals (with the exception of disability service animals with proper identification); video cameras (except those of local media with proper ID); solicitation other than athletic, band and team booster clubs; re-entry without payment, including those with passes; loitering and sitting on the rails.

“Port Arthur ISD reserves the right to refuse entry to patrons that attend our events with items that we deem unacceptable,” the district said in a flier. “All personal items are subject to search. The District is not responsible for any items confiscated by security.”

**CORRECTS Deer Park’s district during the 2016-18 reclassification cycle. Deer Park and Memorial were rivals in 21-6A before the cycle.**

NEDERLAND — Thanks to the impact of Tropical Storm Harvey this week last year, West Orange-Stark did not get to... read more