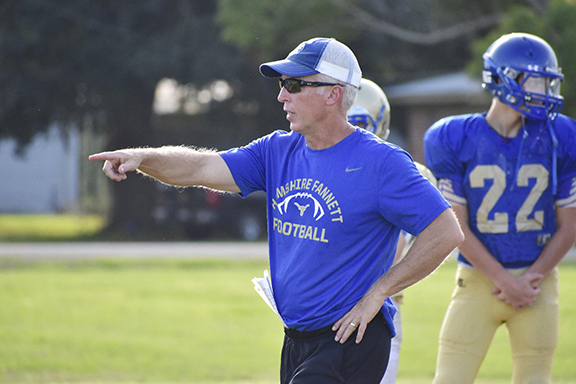 For the first time as a Hamshire-Fannett Longhorn, Head Football Coach Mark Waggoner will lead his team on to the field against Hughes Springs.

The Longhorns are coming off of a 2-7 season and are hoping to start 2018 off on the right foot.

“This is our first test of putting all of the parts together,” Waggoner said. “We haven’t really set any expectations. We just want to be able to manage what we can. We’re making sure that they are getting the new plays down. It’s a lot of a new information for them to take in.”

Waggoner said that he expects a good challenge with Hughes Springs.

“I think Tuesday was our best day of practice so far,” he said. “You can tell things are really starting to click for them. I think we have more than 50 percent of the playbook installed and they are starting to buy in.”

Waggoner said that no one on his staff has any experience with Hughes Springs, but they have been able to watch some film on them.

“It’s only been a couple of scrimmages, but we know they are going to be good,” he said. “They’ve had the same coach for years and they’ve been able to train their students since seventh grade basically.”

Hughes Springs is returning without their main ball carrier or the starting-five offensive linemen from last season, but Waggoner said that he expects them to still be very disciplined on both sides of the ball.

“We want to be able to come out of the game and see that we were able to improve,” he said. “Whether we win or lose,
having something to build on is what is most important. We wan to be able to limit turnovers, block and tackle. That’s football. IF we can do those things well, we can build from there.”

The start of a new season always garners raised expectations for both players and fan bases.

“I think the players probably feel some pressure,” Waggoner said. “A new season always has a great feeling. I wish we could just make that last. Everyone thinks that this is the year their team puts it all together. We want to work towards that. Things are starting to click, but we have to build.”

The game will be played on a neutral field at Center High School. Kick off is set for 7 p.m. Thursday.

SABINE PASS — The Sabine Pass High School Sharks might have had revenge on their minds when they travel to... read more