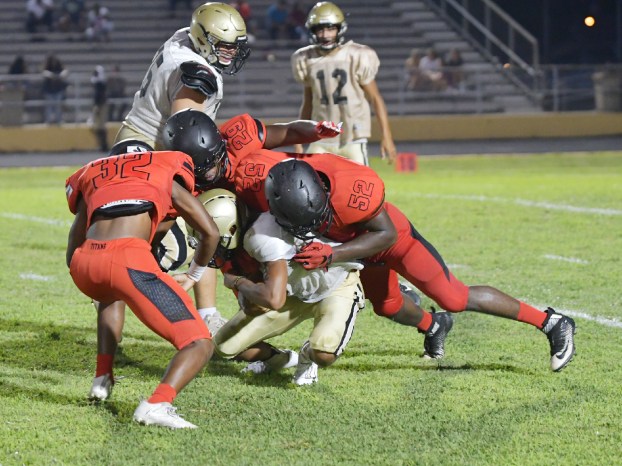 Memorial’s defense brings down a Nederland player during Thursday’s scrimmage in Nederland. (Jereem Augustine/Special to The News)

FOOTBALL: Turning up the tempo: Titans clicking against Bulldogs 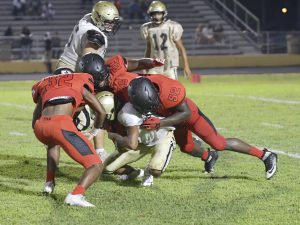 Memorial’s defense brings down a Nederland player during Thursday’s scrimmage in Nederland. (Jereem Augustine/Special to The News) 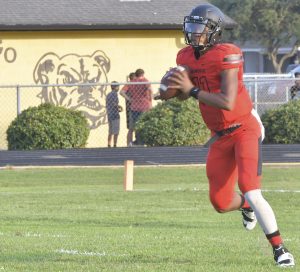 Memorial quarterback Kam Ladia rolls out for a pass against Nederland on Thursday. (Jereem Augustine/Special to The News) 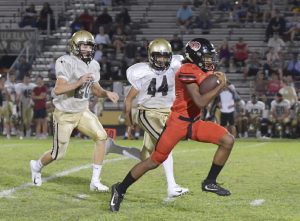 Cobey Richard finds running room on a 57-yard reception against Nederland on Thursday. (Jereem Augustine/Special to The News) 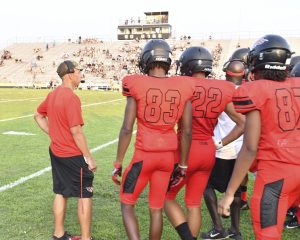 Memorial head coach Brian Morgan gives instructions to his team during Thursday’s scrimmage at Nederland. (Jereem Augustine/Special to The News)

NEDERLAND — Port Arthur Memorial scrimmaged for the only time this season after starting practice on Aug. 13, one week later than Nederland because it held spring drills.

The Titans’ defense was ready to take on an opponent from the jump, and the offense increased its tempo after a deadlocked first half.

Memorial held Nederland scoreless during the second half and took a 24-7 scrimmage victory Thursday night, just eight days before both teams start the regular season. Memorial will be at home to host Deer Park and Nederland will visit West Orange-Stark.

“For a first go-round with somebody else, I was pretty pleased,” first-year Memorial coach Brian Morgan said.

Memorial struck quickly with its “Titan Tempo” and scored in four plays to start the second half. Jatavian Neal hauled in a 35-yard TD catch up the middle from Ladia, who completed 11 of 20 passes for 181 yards and two touchdowns.

“We were able to move the ball, and the guys got some confidence playing with tempo,” Morgan said. “You could tell in the second half we were in much better shape.”

Kenny Pham converted a 33-yard field goal with 3:07 to go in the third. In the fourth, Brian Milton completed a 57-yarder to Cobey Richard and Kason Williams finished the drive with a 13-yard run with 4 minutes remaining.

Both teams traded punts on their first three series before Nederland could open the scoring late in the first quarter of a Thursday scrimmage.

“As a scrimmage, our goal was to come out of that first half with all our starters and see where we were,” Nederland coach Monte Barrow said. “Port Arthur Memorial is a team that you can get a good gauge of where you are. Just the athletes they have and the speed is different than we can simulate in practice. You can’t do it.”

Carsen Arline made up for a dropped third-down pass that would have converted a first down on the previous series with a 16-yard haul from Blaysin Fernandez with 5 seconds left in the period.

Fernandez went 5 for 11 for 55 yards with an interception.

“They came out with a little different front than they had in the scrimmage last week [at Lumberton],” Morgan said of Nederland’s defense. “It took a little bit of time, but coach [and offensive coordinator Zach] Bass and the o-line got a chance to adjust to it.”

Memorial capitalized an a 20-yard interception return by Jacob Washington with an 11-yard touchdown pass from Kam Ladia to Chan Rubin with 5:20 left before the break. The Bulldogs fumbled away an eight-play, 60-yard drive and the Titans started from their own 10 with a 41-yard strike from Ladia to Tavion Gipson. But that series ended with a Noah Lewis pick in the end zone at the end of the half.

Sophomore Brandon Chaney had three carries for 57 yards (with a long of 35) and caught four passes for 58 yards.

“There’ll be a lot to clean up, now, when we watch this film,” Morgan cautioned. “Even some highly touted players we have, have to clean up some things and play better for us to be the type of team we want. I was pleased with the kind of shape we’re in. I was really pleased in effort, and we were pretty good assignment-wise. We didn’t turn the ball over, which is huge.”

“I was pleased with how we came out and established some things offensively,” Barrow said. “Our defense was flying around tonight. Real proud of the way they played together … Sometimes when you’ve got different guys in there, it’s hard to jell together, but they did a great job of whoever was in there and playing hard.”

VOLLEYBALL ROUNDUP: Streaking right along: PNG sweeps for No. 6; Nederland goes 5 for No. 7