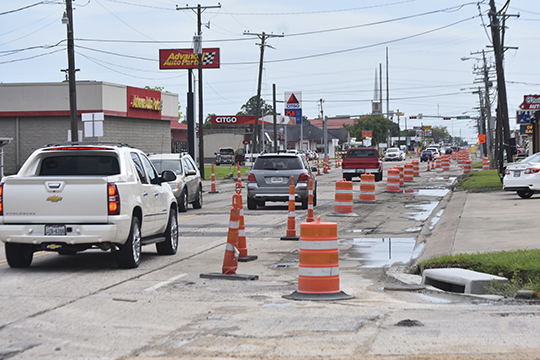 NEDERLAND — The end date for construction on Nederland Avenue has been pushed back a couple of weeks, City Engineer Robert Woods said this week.

“We had to push it back to the beginning of November,” he said. “There were some utility conflicts near 12th Street and Nederland Avenue that we are working through. We also had some bad weather days with the rain that has pushed things back a bit. We budget time for bad weather but that is always hard to predict.”

Woods said that the current issue revolved around not having up-to-date maps of the utility lines.

“Some of the franchises in the area had utility lines that were deeper or shallower than what we thought,” he said. “We’ve been working with the contractor to keep everything running as smoothly as possible.”

Woods said that he doesn’t foresee any further delays for now.

Woods said that there hasn’t been any major difficulties with businesses located on Nederland Avenue.

“We’ve done our best to notify them ahead of time when we will working near them,” he said. “We also try to work around them. We try to limit construction during their busiest hours; that way, we don’t negatively impact them.”

Construction began May and was originally scheduled to be completed by the end of October.

The Nederland City Council will receive an update on the Nederland Avenue project at their next meeting, scheduled for Monday at City Hall.

Also on the agenda is submission of the annual budget and calling for a public hearing to be held in August. The council will also confirm the appointment of Terry Morton as the acting fire chief.

The city will receive Hotel Occupancy Tax Fund financial reports from the Chamber of Commerce and the Nederland Historic Society.

The council will also take action to adopt the proposed tax rate for the upcoming fiscal year.

After a two-week delay it appears the city of Port Arthur is ready to name a new police chief —... read more