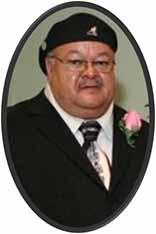 On Wednesday, August 1, 2018, Victor ‘Fella’ Breaux answered the call and was lifted to a peaceful rest that surpasses all understanding. Victor was born on January 16, 1954 in Jennings, LA to the late Victor and Edna Dartez Breaux, the third of four children.  He joined Anita Bonnie in holy matrimony and they were blessed with two children.

Victor was baptized in the Catholic Church where he served as an altar boy in his youth. After graduation from high school, he joined the Army where he worked as a Motor Operator and X-Ray Specialist. He worked for Chevron Corporation for 35 years before retirement.  His love for cooking was shared with many over the years through his catering services. He was also an avid outdoor sportsman who loved hunting and fishing.

Victor embodied the true essence of southern hospitality by opening his heart and home to family, friends and extended family members. He loved spending quality time with his family and friends. He touched every life he encountered.

Visitation will be held at St. James Catholic Church in Port Arthur, TX on Saturday, 8/11 from 7 – 9 am. The funeral mass will follow at 9 am. Interment will be at Greenlawn Memorial Park.