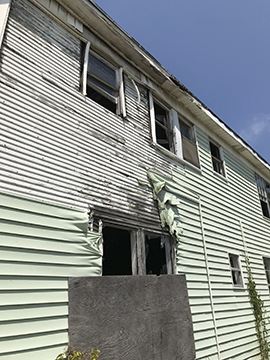 This ramshackle home at 2140 Sixth St. will be proposed for demolition at the Aug. 16 meeting at City Hall. Ken Sticknet/The News

Owners of 50 Port Arthur properties have been given notice to fix their properties or prepare for demolition.

The city’s Code Compliance Department has given notice that the 50 specific properties will come up for consideration Aug. 16 before the Construction Board of Adjustments and Appeals. That’s a seven-member board that may weigh mitigating factors presented by property owners at the meeting, if they contest the Compliance Department’s notice. Some property owners — most, in fact — will likely not show to that 2 p.m. meeting, which will be held in the fifth-floor City Council chambers.

The legal notice appeared in the July 26 edition of The News.

Darlene Thomas-Pierre, director of inspections/code compliance, said if the city had its druthers, the properties would be repaired and remain on the tax rolls. But she said the department reacts to neighbors’ concerns and field inspection reports as to whether a building should be demolished and a lot cleared.

“Absolutely, we’d rather have it repaired,” she said. When the city clears a lot — that work is done by private contract — it leaves a vacant lot behind, which makes neighborhoods less vibrant.

The legal ad, she said, notifies the public about the hearing. Liens are placed against the properties for the cost of demolition.

Most people don’t show up to defend their property against demolition, she said. If properties are beyond repair, she said, it is clear to everyone who sees it. Some have moved away.

“We may have five or six out of 50,” she added, people who dispute the red tags or who say they want to bring their properties up to code. Most don’t.

Properties on the list include burned structures, collapsed garages and a residence/RV trailer. There are some commercial properties.

Marilyn Carter lives next door to a property at 2140 Sixth St., a two-story residence, according to its description, where no one has lived for perhaps 15 years. The ramshackle property is a source of rats, mice, feral cats and roaches in the neighborhood, she said. It is on the city’s list for demolition and will be discussed at the Aug. 16 meeting.

“It’s always been like this here,” Carter said. “They just came this morning and cut the yard.”

Carter’s home was built on her property four years ago; newer, well-cared-for homes are across the street and on both sides of No. 2140.

Chester Utley said the dilapidated home has changed hands on occasion; he said he’s been inside the home and it is nothing but a shell. He said he was preparing to cut back a tree from the vacant property that presses down on Carter’s fence.

That’s why the city inspects homes and issues red tags, Thomas-Pierre said, “to abate nuisances so citizens in that neighborhood are not dealing with an eyesore or a dangerous situation.”

Dangerous situations could include squatters and drug houses, which sometimes fall victim to fires.

Port Arthur may have to wait a while longer for a new police chief. Interim city manager Harvey Robinson had... read more