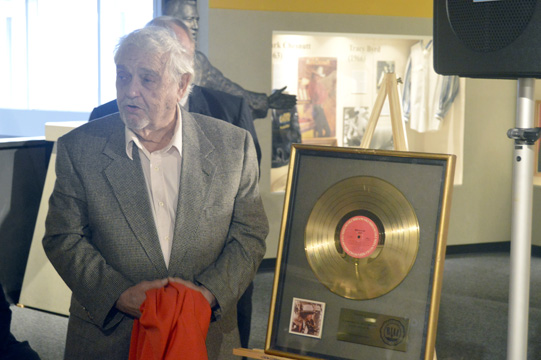 FILE PHOTO — Don Meehan unveils his gold record for Bob Dylan’s album “Desire” at his induction into the Gulf Coast Museum’s Music Hall of Fame. Meehan and other enthusiasts would like to see a return to traditional county music.

Big turn toward country; Don Meehan, others want to rescue a traditional sound

Don Meehan sang pop at the Jefferson Theater in Beaumont in the ‘40s, was a general’s choice to replace crooner Vic Damone with an Army band in the ‘50s, helped with sound engineering and mixing on Simon and Garfunkel’s “The Sounds of Silence” in the ‘60s and was a producer on Bob Dylan’s “Desire” album in the ‘70s.

So what’s he got planned for his own 80s, now that he’s back in Jefferson County? He wants to recapture the traditional magic of country music, with steel guitars and fiddles.

That includes hopes for locating major venues for country music in his native Beaumont and for finding a place for traditional country music within the industry — in Nashville as well as in Beaumont.

It’s not such a stretch for the Beaumont native, who used to compete — and win, he added — in talent shows that included George Jones. When his act would beat Jones’ country efforts, “ ‘Possum” would squint his eyes so all might sense his wrath, Meehan said.

Though he focused on pop and a career in New York City, Meehan said, he was plenty familiar — and stayed familiar — with country, writing perhaps 50-100 songs, mostly for his own pleasure.

“I grew up playing country in the ‘40s,” Meehan recollected. He and Jones both wanted to play country for a while. But following graduation from Beaumont High, Meehan skedaddled to New York City and took his pop act around Manhattan.

He enjoyed some short-term success there, signing with Victor Records long before Elvis did and even recording some songs for Murray the K, a DJ and music promoter who hobnobbed with some of the top acts in New York City in the 1950s and ‘60s. It didn’t come to much, especially when he returned home for a Beaumont visit long enough to hear his mother tell him, “Your draft notice came.”

Meehan spent a couple of years in the 3rd Army, mostly with its traveling band, and played with Faron Young and Gordon Terry, a bluegrass and country music fiddler who later played in Merle Haggard’s band.

In the 1950s and ‘60s, Meehan’s interests shifted from behind the mic to behind the music — sound engineering and production and mixing. He did audio work at the United Nations in those early years and might have stayed there for good, if not for an opportunity to join Columbia Records in 1963. He took the job there and remained for 32 years.

At times, he crossed paths with friends from Southeast Texas. He worked on some arrangements for the Big Bopper — “J.P. (Richardson) and I were friends,” he said — and he helped his old friend from Beaumont with sound production, an area in which The Big Bopper was unfamiliar.

He did work on George Jones’ version of James Taylor’s “Bartender Blues,” which won some great acclaim for Jones.

And, of course, he did work with Dylan and Simon and Garfunkel and Barbra Streisand and other musical luminaries during the Columbia years. His long and successful career was extolled when he entered the Museum of the Gulf Coast, and he moved back to Jefferson County and his country roots, he said.

It’s a late turn toward country but Meehan said he can’t stop his mind from churning out promotional ideas for restoring country music to its basics. What’s playing nowadays, he said, is not what your grandparents heard. Take it from a contemporary of George Jones and Faron Young, a guy who now lives in Tex Ritter’s chosen hometown.

Meehan has gathered up a local assembly of country music enthusiasts, some two dozen substantial people, who will meet for a second time Sunday to talk about how to promote traditional country here and beyond.

They include fiddler David Varnado, recently acclaimed by the Texas Country Music Association, and Don Rollins, who’s written country songs for Nashville stars for almost three decades, including the No. 1 “It’s 5 O’clock Somewhere,” covered by Alan Jackson and Jimmy Buffett.

Meehan said the group includes some strong women — women, he said, have been too often pushed aside by Nashville — and others who are forming a group under their chosen name, Global Country Music Association.

“I was originally thinking about Southeast and Coastal Texas,” he said about the group’s intended influence. But his cohorts have eyes on extending country music’s impact beyond the U.S. borders, sort of a “Country for countries” theme. It would promote all country music genres, he said, but particularly traditional.

“I’ve been working with him (Varnado) and with some great names and personalities and talents to get input. Maybe we can cross some bridges that others have failed to cross or overlooked.”

He’s also kicked around the idea of creating an Opry-style venue in the area, something that would use not only local musical talent but also comedy and more.

He’s also approached Mickey Gilley’s business team about expanding his operation into Beaumont; Gilley has eyed and attempted expansion before.

“We’ll have a business plan to present to Mickey when he comes,” Meehan said.

Meehan said since his return to Jefferson Parish, he’s done teaching about mixing and he’s worked on projects from his own studio. He said he’d like to see about expanding into academic work with sound engineering at Lamar University. At Columbia, he said, he worked with people who set up a similar, successful academic program at Berklee College of Music in Massachusetts.

There are lots of strong-willed, influential people in Beaumont and in the area “who want to put it back on the music map.”

Police have person of interest in Prince Hall murder