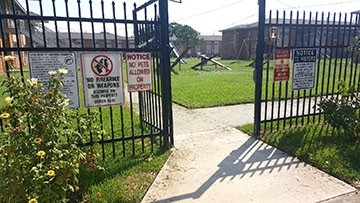 Police have person of interest in Prince Hall murder

Port Arthur Police have a person of interest in Wednesday’s fatal shooting of Floyd Dergent at Prince Hall Village Apartments.

Deputy Chief Martin “Bubba” Blitch said police were still interviewing people and following up on leads in the case.

“We are asking if you have any information (about the shooting) to please come forward,” Blitch said.

Persons with information about the murder can call the Port Arthur Police Department at 409-983-8600 or Crime Stoppers at 833-TIPS. You may be eligible for a cash reward of up to $1,000.

Police were originally dispatched to a call for shots fired at the apartment complex, 914 W. 14th St., and while en route were told by dispatch that a person had been shot and was “down” within the complex. When they arrived they found Dergent, 49, deceased. He had sustained a gunshot wound to his upper body, according to a press release from PAPD.

The apartments, located on the West Side of the city, have been the site for violent crimes in the past.

Dergent’s murder is the 10th homicide case in the city this year.

A bevy of young actors come together to bring to life two beloved children’s properties to the theatre stage. Act... read more