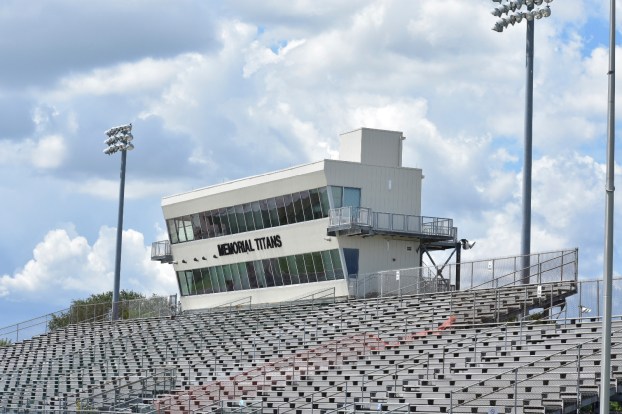 Memorial Stadium, pictured July 14, is expected to shine its Friday night lights for five home games this season after the Port Arthur ISD approved a deal to improve the walkway to the press box. (I.C. Murrell/The News)

FOOTBALL: ‘It needed to be done’: Memorial coach relieved press box walkway will be finished in time for season

Although Brian Morgan had just learned at some point more than a week ago about a safety issue regarding the Memorial Stadium press box, the first-year Memorial head coach said he and Port Arthur ISD Superintendent Mark Porterie agreed that a project to address the issue needed to take place quickly.

“We were on the same page from the beginning that it needed to be done,” Morgan said. “We were both working as hard as we could” to come up with a solution.

The PAISD approved in an emergency meeting Thursday repairs to the walkway leading to the stadium press box and hired Daniels Building and Construction of Beaumont at a cost of $133,000. Following a board retreat last Saturday, the PAISD closed Memorial Stadium, citing an unsafe passage to the press box.

Recent heavy rains in Port Arthur were believed to cause rotting in the wood panels underneath the walkway, which raised concerns of the walkway structure. Porterie said neither he nor the contractor could discover wood rotting in the walls covered by existing metal panels.

Porterie told The News last Saturday the walkway repairs might take two months to complete. Following Thursday’s emergency meeting, a timetable was set for five weeks, meaning the Titans would play all five of their games at home, beginning with the Aug. 31 season opener against Deer Park.

“We just needed time to think and discuss things with the engineer,” Porterie said, asked about the shorter timetable. “We were putting things in place in case we could not play at home, but we were always going to have the press box ready for us to play at home. That was the direction we were going.” 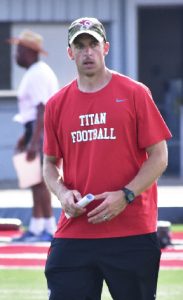 Morgan, who is also the district’s athletic director, said he had arranged with Lamar University to have games at its Provost Umphrey Stadium if the walkway could not be fixed in time. Morgan was an assistant at Lamar before he returned to Memorial as an assistant coach in 2017. He thanked Lamar officials and Cardinals head coach Mike Schultz for helping him with arrangements.

“That was the only place I wanted to have it if we couldn’t play in Port Arthur,” Morgan said.

But it’s a big relief for the first-time head coach that PAISD is making sure the Titans’ home games are true home games.

“We were facing the possibility of having 10 road football games,” Morgan said. “But we’re going to have five home games at home. The kids are excited. For those visiting teams, I want those people to have the Port Arthur experience. I want them to deal with the home team and the home fans on a Friday night.”

Among the suggested repairs Porterie mentioned last Saturday, galvanized C4x5.4 steel channels would replace the existing 2×8 wood joists, the existing diamond plate deck would be reused and continuous metal flashing along all walls where they meet the walkways “should take care of the problem,” he said.

The Titans usually practice Mondays, Wednesdays and some Thursdays — depending on the start of sub-varsity games — during football season at Memorial Stadium, located at Thomas Jefferson Middle School on Jefferson Drive, since the practice field at Memorial High on Ninth Avenue is all grass and the stadium, like at most large-school facilities in Texas, use turf. The walkway reconstruction should have no effect on the Titans’ practices at the stadium.

Morgan relied on close ties, some of them to Lamar, to build his first staff, and they’ll enjoy the comforts of home together.

Morgan named former Galveston Ball assistant coach and Florida State defensive back Korey Mangum as the defensive coordinator. Memorial beat Ball 45-14 in the area round of the 5A Division I playoffs last November.

“When I interviewed for the position, I gave a list of guys I wanted to hire,” Morgan said. “I said these are my guys, and I want to hire every one of them. There’s not a guy I didn’t have a connection to.”

Editor’s note: This article provides an encapsulated look at each Southland Conference football program except for Lamar going into the... read more