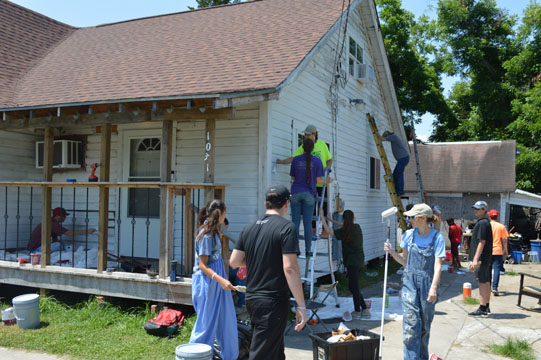 Under an unrelenting sun, volunteers from across Texas were working hard across the city to get folks back in their homes.

The youth groups, organized and run by several adult volunteers, consisted of middle school and high school students from around the state. They performed duties like painting and sheetrock in some of the hardest-hit areas along Seventh Street, 11th Street and 14th Street as well as in other neighborhoods.

The relief work is part of a larger effort that has been performed by adult members of the church regularly since September, where Port Arthur native Wren Loyd helped guide their efforts to the beleaguered city.

“We have local friends and connections here,” Mike Stone, instruction coordinator, said. “Loyd’s nephew works in Waco and knew there would be need for construction work. So, we reached out to Wren and her family to find out who needed some extra help.”

Loyd attends St. Paul United Methodist Church in Port Arthur, where she works with the community in West Side. She has described herself as a liaison for the Port Arthur relief efforts through the Methodist churches.

“They started coming in September and the youth decided they wanted to do it, too,” Loyd said. “The adults come at least once a month.”

According to Stone, 106 volunteers — about 80 students and 26 adults— had arrived and were working on various projects this week in Port Arthur.

“We’re painting four houses and should have that finished by the end of the day,” he said. “This week we gutted one house and part of a church. We’ve sheet rocked three houses, and then we built a ramp for a guy who had a stroke; then we repaired a ramp for a 99-year-old lady. And then we cleaned up the sidewalk for some dead end streets where debris had floated to during the flood.”

Stone said the churches had two more crews coming next week, as well as the usual monthly installment of adults.

“We have other groups doing weekly trips,” he said.

In expounding upon the reasons for volunteer efforts among youth, Stone pointed to the community mindset of faith and service.

Stone has been performing volunteer work for 20 years and said it has led him to many places across the land.

“We give back to people who need a little help,” he said.

All volunteer efforts are funded by donations to the church.

“It is all funded by the church,” Stone said. “We pick up the donations for construction materials, and all the youth have paid to go on the trip. So everything we’re doing is funded through donations.”

Youth volunteer Landry Dunham, 13, of Waco was working at a house on Delaware Drive. He was assisting with painting duties.

“Honestly, I was invited by our church to come,” he said. “I felt that people needed help.”

Port Arthur native and student Shies, 10, was helping. With paint on his cheek, he was going back and forth, making sure everyone was doing their job.

He lives with his mother in the house that was being worked on; both of them are currently staying in Beaumont until the work could be done.

Shies described himself as happy that there were so many people volunteering to help him and his mother out. He joked that he was the project boss.